The Lost Art of Dress: a book review 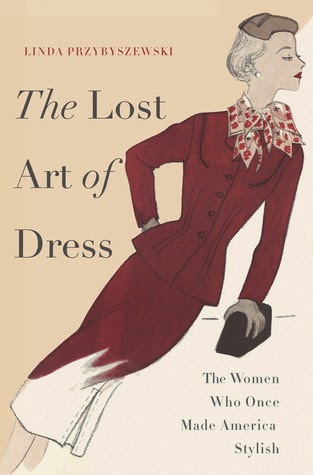 The Lost Art of Dress: the Women Who Once Made America Stylish / Linda Przybyszewski
New York: Basic Books, c2014.
329 p.

I so enjoyed this history of the "Dress Doctors" that ruled home dressmaking and fashion over the first half of the 20th Century. Though it was entirely focused on the USA, it was fascinating.

The author shares stories of the women who shaped design and home dressmaking over the early part of the 20th century -- through Home Economics departments, 4H, women's clubs, radio shows & pamphlets, the design principles that shaped American style were shared widely. They were based both on artistic beliefs in harmony, balance, proportion, rhythm and emphasis -- two sisters in particular were experts at teaching these long-standing artistic elements as part of clothing design -- and on economy and frugality.

There were many women who taught and emphasized different elements of home sewing, and the notes and bibliography of this book are a goldmine. I found quite a number of the books she mentioned available to read via OpenLibrary, from Mary Brooks Picken's The Secrets of Distinctive Dress (1918) to Margaretta Byers' Designing Women (1938). There were even some pamphlets available to read from the Women's Institute of Domestic Arts & Sciences, like this charming guide to sewing Aprons & Caps. Przybyszewski often quotes from these vintage sources, which can be both oddly relevant and truly amusing to the modern reader.

This book is clearly based in extensive research, sharing the ideas that permeated the domestic arts, those of suitability of dress affected by things like income, personal appearance, function, and skill levels. The Dress Doctors were quite stern about areas of 'appropriate' wear, but they also involved themselves in campaigning for women's comfort -- against ridiculous fashions like the hobble skirt (which was responsible for actual deaths as women couldn't run out of the path of oncoming vehicles, and in one case, couldn't swim after falling off a bridge) or the tiny pinched shoes that restricted free movement. It's a wonderful social history of a large swath of the 20th century, and shows how much the Dress Doctors took for granted that the women learning domestic skills were also working women -- they discussed appropriate and useful fashions for shopgirls, teachers, office workers and so on, as well as the society lady (who wasn't really their target market). All of these women worked themselves, and influenced their areas of expertise greatly. Some of the dress doctors were even involved in academia, in chemistry departments and the like, before eventually being shuffled off into "Domestic Arts" which were often first then targeted when budgets shrank.

Przybyszewski touches on the inequity of race in her book -- the Dress Doctors often addressed an assumed market of white women, and when they went into homes and women's clubs to teach, had to recruit black women to work as adjuncts to teach in black communities, as many of the default instructors would not go into those homes. She also reflects on how the manuals that taught suitable colour matching and how to make fashionable choices based on appearance also gave short shrift to anyone outside of a very narrow range of "not-white" complexions. There is only brief mention of these issues within the scope of this book, though, and I would love to read a book that is completely focused on this area -- I think there is a lot more to learn here.

I was so engaged by this book, which I read in e-format thanks to Netgalley. Its publication date is set for April, and I would love to get myself a hard copy to refer to often, as there was SO MUCH information about so many different women, and different organizations that affected their work. I felt that this combined elements both of good social history and of dressmaking in particular (of course), both of which I love.

Anyhow, there was much more detail in it about tons of other designers, instructors, and social movements that I could share, and many more cool anecdotes and interesting facts to trot out at a dinner party, but I'll stop now and hope that you'll be intrigued enough to get yourself a copy in a couple of weeks when it is available. If you have any interest at all in the domestic arts, or women's history, or simply fascinating non-fiction, do put this one on your list. Przybyszewski has created a book that will end up leading you down many new paths of investigation!

(first posted on my book blog, The Indextrious Reader)
at 11:18 PM