My Kyiv Jacket: Jalie Tania in blue and gold 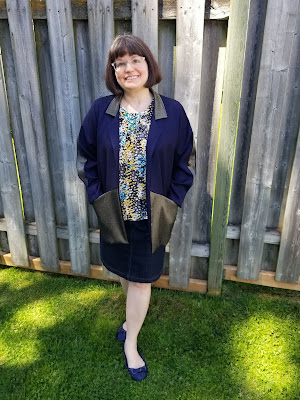 Well, I made it to Round 3 of the Pattern Review Sewing Bee! This is farthest I've ever gone in this challenge, and I'm enjoying it so far. The challenge set was to make the Jalie Tania coatigan, and make it your own. I've made the Tania previously, so didn't have to do much fitting or tracing, which was a definite benefit as the week-long sewing challenge fell on a week in which I was very busy and short of time.

I ran a number of ideas through as possibilities, until I finally decided on making a lightweight coatigan from some navy and black wool challis in my stash. I was taking Kyiv as my inspiration: it is sometimes known as the City of the Golden Domes, and so instead of the bright yellow and blue of the Ukrainian flag, I went with navy and gold in a nod to both. 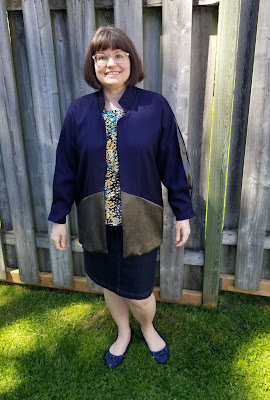 I cut my navy wool, and the gold lining I had in mind. I was planning on doing some embroidery and/or stencilling in gold, but when I was making samples I just couldn't get it right. It all looked too "homemade" and not what I was going for. So I decided to make a change. 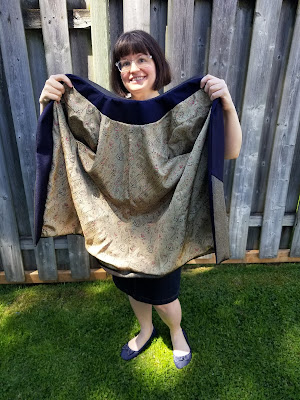 I knew I had some gold-toned fabrics in my stash so got them all out and changed the lower part of the Tania. I decided on some bronzey stretch fabric so had to interface it with lightweight interfacing to keep it from stretching out. Matching up those "V"s meant some fussy hand basting to begin with, something I experienced on my last go-round when I was matching up piping points. This bronzey gold seemed to go nicely with both the navy and the more golden lining. 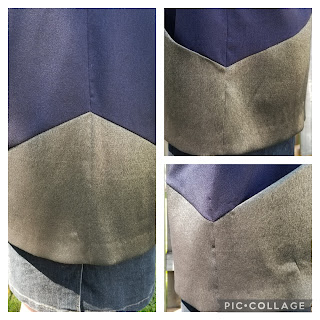 But I still didn't think it was enough, it needed a little more design. So I made the interior of the collar also in bronze, to highlight it when the collar is turned down. And more importantly, I decided to make a slashed sleeve, both to show off more gold and as a tribute to the church domes that were my inspiration - the oldest churches in Kyiv were built in 1037 and kept getting added to up to the 1850s and beyond, so that stretch of years includes the European fashion of slashed sleeves and doublets somewhere in there ;) 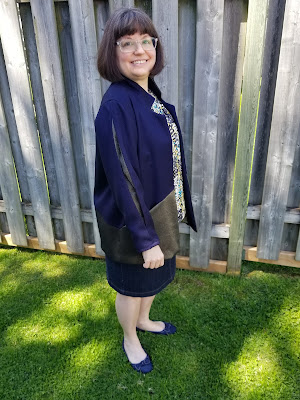 I used a strip of 2.5" wide gold fabric, attached to the sleeve which was split down the middle (it's a symmetrical sleeve) with a 1/4" seam, and then folded back together with edges touching. It's stitched down by about 3" at top and bottom, while the middle is left to open and reveal the gold insert. 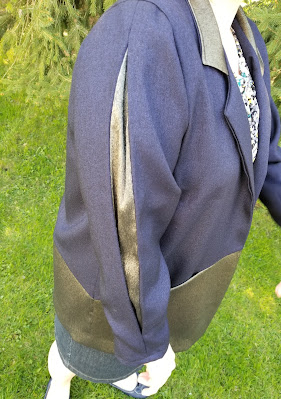 This wasn't too hard to make -- the pattern is quite straightforward. I didn't have many fitting adjustments to make, both because I am a fan of the boxy shape, and because I've made it before. But all the additions and changes did mean I had to start over a bit and think about how to put it all together most efficiently. 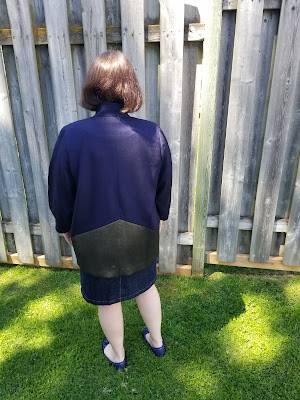 While I don't think this was really out-of-the-box or terribly unique (no real changes to style lines or overall appearance) I enjoyed making it. I was pleased with my inspiration, and was also happy to have been able to once again make the entire project out of stash materials. I knew that gold lining would have a perfect project some day! 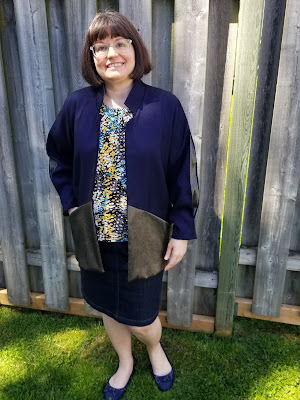