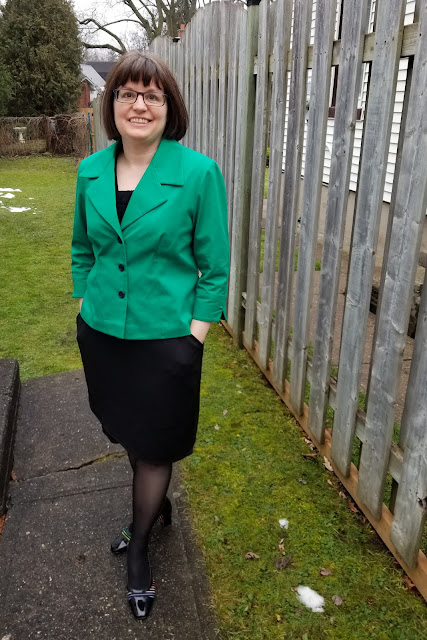 For most of December I was working on this green twill blazer, New Look 6159, for the #DesigningInDecember challenge (where you might still be able to vote for your favourites!). And also because it was on my sewing list as part of the Bold Playful Power Suit theme I created this fall.  This jacket was also inspired by the Dior Spring 22 show, all those bright skirt suits! 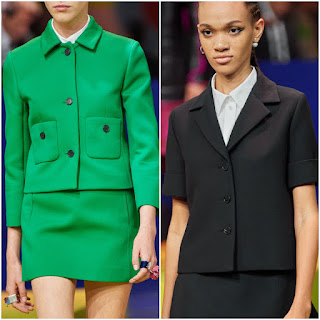 I've never made a real blazer before so this was a learning experience. A real learning experience, as it turned into a bit of a comedy of errors with so many things going wrong right from the start. I got the pattern adjustments made and cut this out, then realized that I had somehow lost the second sheet of instructions for the pattern -- I have never lost anything from a pattern before. The instructions that I had stopped at the point where the lining was just starting to be constructed. Fortunately, I had this great book on linings in my stash, which gave me what I needed to get the lining in, alongside another book on tailoring that I'll talk about later on this month. 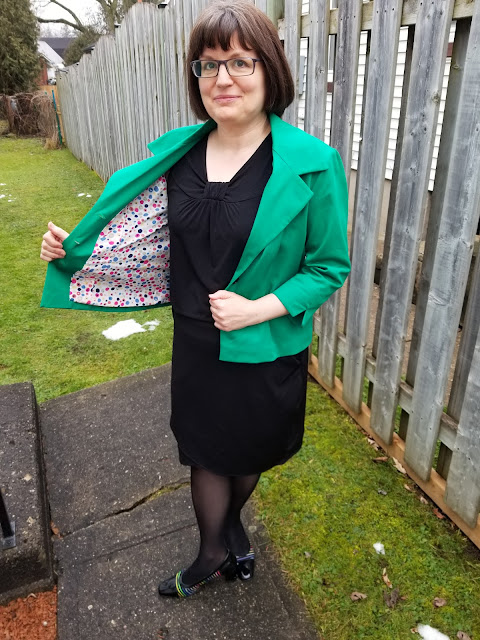 I had a bit of difficulty getting the sleeves set in, which I normally don't have trouble with. I think that this fabric is a little sturdier and harder to smoothly gather, which added to the issue. I unpicked both sleeves at least three times before deciding that it was just good enough. When I got to the lining, which nobody will ever see, both sleeves set in perfectly the first time, smoothly gathered and with underarm and shoulder seams matched exactly. Sigh. I did shorten the sleeves slightly, since my arms are short, and I wanted this to remain 3/4 length. They are finished with a nice notched cuff which can be left down or folded up; it's a nice detail. 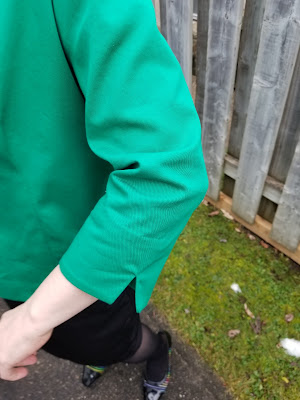 This fabric resisted easy pressing as well, and I'm not 100% happy with the darts. They aren't terrible but could be better. The collar though, whew, that was tough! The point where the edges meet in that notch just wouldn't join easily. I unpicked both sides at least 3 times as well, and restitched carefully, turning it to see what it looked like. Finally, again I got to the 'good enough' stage, and just steamed the heck out of the collar at the end. It's actually the bit I'm most pleased with now. 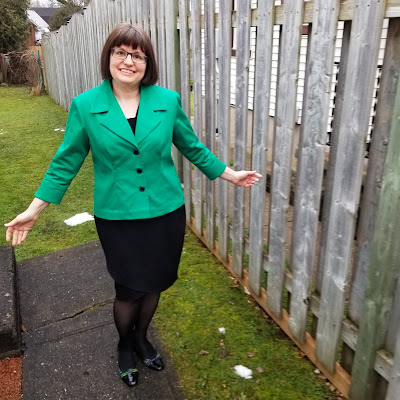 I chose a confetti print poly lining from my stash - a little more staticky than I like for a lining usually but I've had it a long time and couldn't resist the visual match. As noted that went together beautifully and sewed in with no issues at all. The pattern does include an ease pleat at the centre back so I didn't have to add one in.
It's actually quite a decent pattern; everything matched up as it should and I didn't have to do any extreme fitting. I did my usual length adjustments and then graded from 14 shoulder to 16 bust and 18 hip, quite common for me. The only unusual adjustment was that after shortening it above the bust and again above the waist, I added on 1.5" at the hem because I felt it was a little too cropped for my tastes. And I had to drop the dart points by 2" each. Also, when I tried the outer jacket on prior to adding lining, I thought that a 1/4" shoulder pad would improve the look of the fit, and it did. Good thing I had some in my stash ;) 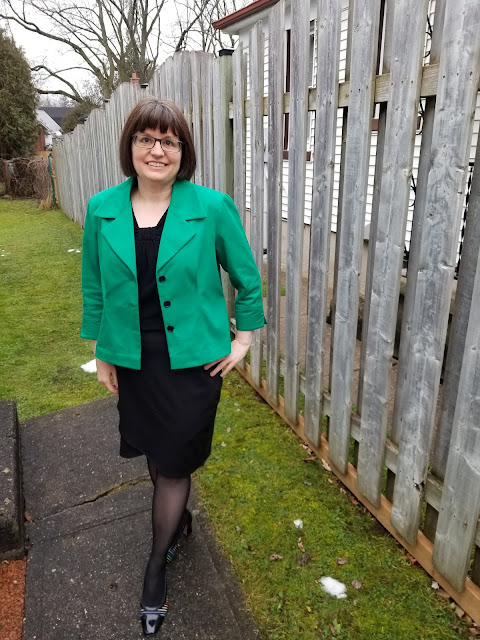 I finished it off with black buttons, inspired by Dior. That was another fun moment - I thrifted these perfect buttons and had carefully kept them on my table for this point in the process, and then couldn't find them when the buttonholes were to be put in. I was trying to finish this by deadline, and it was the afternoon of Dec 31 and there I was wasting time, turning everything over trying to figure out where the buttons could have got to. I finally uncovered them (under a stray pattern piece) and thankfully the buttonholes went in like a charm (I got to use my new buttonhole chisel!) and I stitched on these black buttons and still got to take pictures in the outdoor light. Yes, it was warm enough here on Dec. 31 that I could stand in the yard for these photos!
I'm still planning on making a matching green skirt so that I can really knock off that Dior set. More on that later! For now, I'm relieved that I had the time to really work on this one and get it done despite all the problems I had with it. Hopefully next time I'll know a bit more and it won't take as long to make my next blazer :) 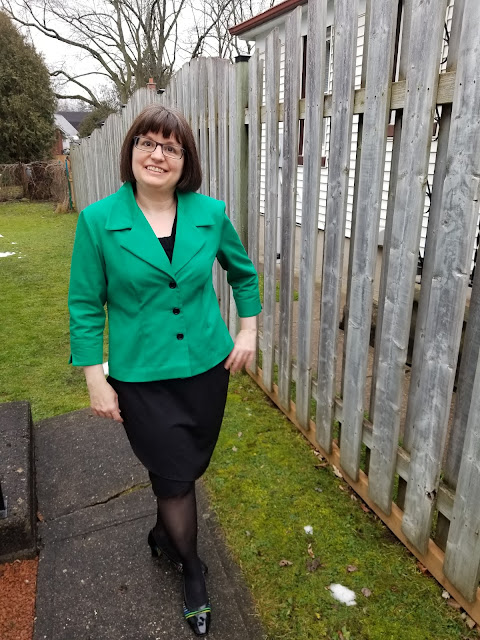