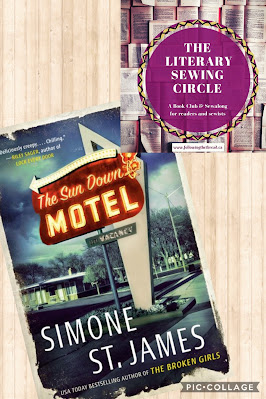 We have jumped right into the Literary Sewing Circle round for this fall! Today's the day for some beginning book talk! How are you doing with the book? Have you started it yet? Finished it? Do you have any reactions you'd like to share?

I'll add some of my own thoughts and you can reply to them or add your own impressions. If you want to hear other takes on a part of the book that you are curious about, leave your own questions in the comments, too. 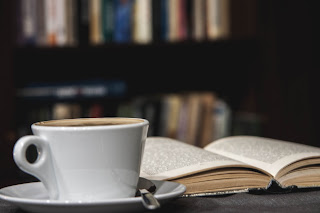 If you decided to pick up this book and read it for this round, why? Do you usually like spooky books like this or is this a new genre for you?
I don't usually like books that are TOO scary. This one was just right for me, gave me shivers (especially when reading at night) but didn't freak me out or have too graphic or gory bits in it. I have a low tolerance for horror so this is about as scary as I get ;)
What do you think of the dual timeline? Does it work for you? Do you prefer one over the other?
I liked the dual timeline and the way that they interact. Of course, I enjoyed the 80s a lot as that one of my favourite decades, and also because I found Viv slightly more interesting than Carly. One effect of the timeline shifts is that there is a fair bit of repetition of some of the content, which is unavoidable. But overall I liked the way the two stories interact and come together in the end.
Why do you think Vivian and Carly might both have made the decision to stay employed on the night shift at a haunted, creepy motel? Would you have done the same? Would you have made a different choice?
Yeah, this was funny to me -- if I was the main character in this book, the story would have been over in the second chapter. One night like Viv's first ghostly encounter and I'd have been out of there and on a bus to NY City. I can understand, with their character development and their fascination with true crime, why they would stay...but I would not have done the same!
Most of the characters in this story are women, and their stories are the primary focus here. Do you feel a stronger draw to a specific character, and if so, do you feel more intrigued by them as they appear in the 80s or in the present day?
I loved how women's experiences were primary here. Viv's relationship with her mother and sister, Carly's own family experience and fascination with the story of her aunt, all the women who were killed and their stories -- everything showed many sides of women's lives and how women are always the ones expected to "be careful" and take precautions - men are never expected to take a role in managing their own actions or those of other men. I feel that this theme is very timely right now, and hope that someday this dynamic will change.
Both Viv and Carly are compelled to investigate missing women and their stories. What did you think of their actions as amateurs/true crime aficionados?
I would have called in the police long before either of these two would have even thought of it. However, the police didn't seem too interested in what happened to the women that Viv was investigating so I can see why she got obsessed and couldn't just ignore it, especially when she felt that she was hot on the trail. Carly, on the other hand, could have gotten some help or at least information on the guy she felt creeped out by before he started stalking her.
The women who were murdered are described differently by the media. How does this reflect the way that victims are described even today? What part do you think that plays in Viv's determination to discover the truth?
As noted, the police in Viv's timeline seemed perfunctory about the murder investigation, especially for the women who weren't "beloved wife and mother". This says a lot about the value placed on women's lives, which feels like it hasn't changed very much, in many ways. Viv's sense of justice for the women involved drove her to continue investigating, and with Betty's constant presence spooking up the joint, Viv can't forget her mission. I could appreciate how she took the investigation - and justice - into her own hands, since nobody else was doing anything about it.
Is there anything specific  in the book that has sparked an idea for a project yet? Are you mulling over any ideas?
It's still early days so I only have some vague ideas, maybe based on some of the 80s inspiration I've already shared -- or maybe on something in Carly's timeline, and the places she hangs out. I'll be sharing a bit of Carly-based inspo next week so maybe you'll get more ideas then as well. If you've thought of a project idea so far, feel free to share in the comments - along with your thoughts on these questions, or other elements of the book.