This is a delightful book that I found by chance. It is exactly what it says it is -- a book of buttons! There are a wide variety of button ideas in this book, from traditional Dorset or Singleton buttons to one made with found objects like shells, twigs or even erasers.

Beaman goes over some basic techniques in each area that could be expanded with a bit of imagination, but also gives really clear step-by-step instructions and lots of photos for each project too. While it's unlikely that I'll end up making buttons from shells, there are many other ideas that I loved. I was particularly intrigued by the cord wrapped buttons; they are beautiful and really elegant, though they also look a bit time consuming. 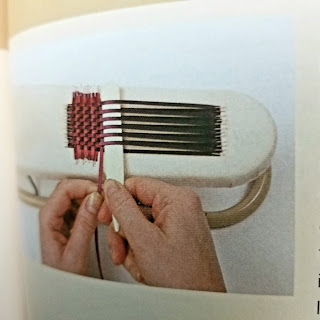 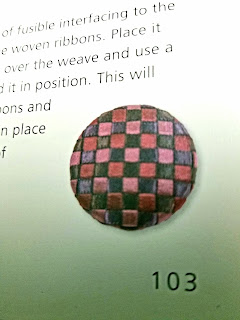 I like the variety in this book, also. From simply embellishing existing buttons with added images, adding pyrographic designs to wooden buttons, or topping a button with a fabric rose or pom-pom, she moves into more elaborate ideas like knots and cords, stitched and woven rings, or clay and plastic originals. 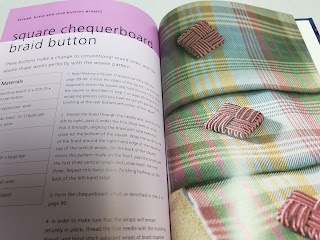 While these are just quick intros to various techniques, some of them like the Dorset buttons have such a history and range of design that if this one example interests you, it's like a door into the whole subject -- there is so much you can look up about Dorset buttons and their many patterns. 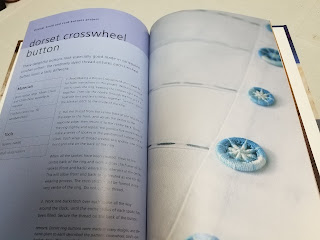 One of the most unusual ideas, for me anyhow, was the quick project near the end suggesting that novelty erasers can be cut down into discs and used as buttons. Since I was a huge stationery freak when I was young (ok, still am) I'm surprised this idea hadn't occurred to me earlier! 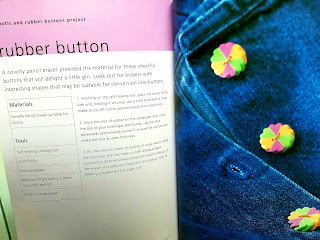 The only slightly odd thing about the book is the way it's structured. In each section, the concept is introduced with techniques, ie: Wooden Buttons, Embroidered Buttons  and so on. Then immediately following, each button is introduced again with a one page layout of instructions and supplies, with the facing page a full page photograph, which really helps you to see the details. However, when first looking through the book it took me a few minutes to grasp why each button appeared twice.

In any case this is a really fun book to look through, and there are at least 10 ideas I'd love to try out. I foresee some button up projects in my future! With creative ideas and clear instructions, I think this is a book that could inspire anyone looking to add a little something extra to a project. 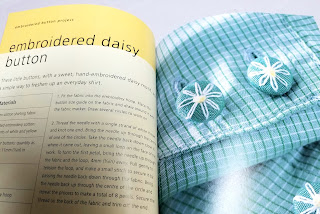