Weekend Review: The Time in Between

August is #WITMonth -- Women in Translation Month. In case you don't know what that is, it's a movement started 6 years ago by a book blogger (and scientist) who noted that women were translated only approximately 30% of the time, even within the already small number of translated books in English. So it's an attempt to focus on and highlight the wonderful women's voices out there, and encourage more to be translated. I've been reading along for a couple of years now (you can find all my book reviews at my book blog, The Indextrious Reader, under the tag #WIT)

In any case, among all the serious novellas and short stories I was reading, I came across a fabulous book that I think all sewing readers will also love. It was the sprawling saga  that I was looking for.

Set in pre-revolutionary Spain, it follows Sira Quiroga, a young woman who grows up as a dressmaker's apprentice alongside her mother. She doesn't know who her father is, at least not until she is in her late teens.

When she becomes engaged to a quiet, meek young man of her own social class, she thinks she knows how the future will unroll. But she's so wrong. When they go to buy a typewriter (her fiancé is convinced that learning to type so that she can become a civil servant rather than a dressmaker is the best idea for them) she meets a charming, charismatic salesman. And her life changes.

As the civil war in Spain heats up, Sira and her lover flee to Morocco; then Sira moves on when she's abandoned, to form a new life as a society dressmaker -- which requires quite a few shenanigans to get started. And her dressmaking leads her to more: to spying, using her dress patterns and sketches to communicate her results.

The story is a series of obstacles put into Sira's way, and the revelation that she can manage all of them despite thinking of herself as a meek girl from the lower working classes. She forms and reforms herself to shape her life to what is given to her. She's a fascinating character, a very likeable main character who does what she has to but never hardens. The setting is fabulous -- I learned a lot about Spain in the era, including the geographical as well as political realities.

Sira even goes to Portugal near the end, to act as a spy in the guise of a fabric buyer; there are barely any good materials left in Spain. Her fake name is quite literally her real name backwards, which seems just a bit amateur to me. But she infiltrates the office of the man she's to track down. However, as a good dressmaker, she's distracted by the quality of the silks and fabrics he has for her and for a moment forgets the other part of her mission. I could relate!

I loved the way that sewing is an integral part of this story, not just a tacked on profession to give the main character something to do. Her sewing and designing changes her life, it gives her the ability to reinvent and better herself, to continue to live and to create, and leads to her involvement in the spy world. In the disaster of war and abandonment, she finds herself again when she picks up her needle once more: 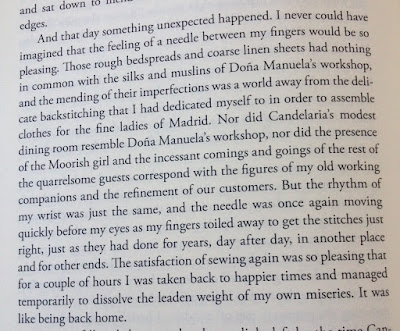 There is verisimilitude to the sewing parts that makes me feel that I can trust the other more historical elements as well. It's an entertaining, absorbing spy novel; a historical context which breathes; and has some fabulous characters. I really loved this one and the 615 pages flew by as I could not put it down. It has romance, intrigue, smoothly flowing writing, a great setting, and strong female characters. Recommended!
at 11:58 AM