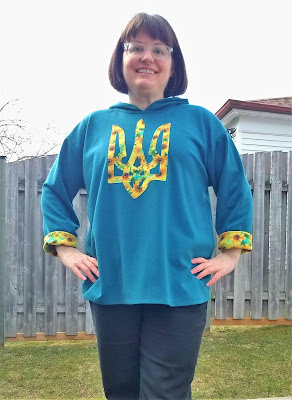 The Pattern Review Sewing Bee is on again, and I decided to join in on the first challenge -- to make a hoodie with accents. The challenge is to make something in a one week period, then about half the entries move on to the second challenge and so on.

I don't usually make casual clothes, so at first wasn't sure about joining in on making a hoodie (or as we call them in Saskatchewan where I grew up, bunnyhugs.) But I flipped through my Burda magazines to see what patterns were there, and also looked into my stash, and an idea was born. I thought about how I could make something to recognize Ukraine right now. 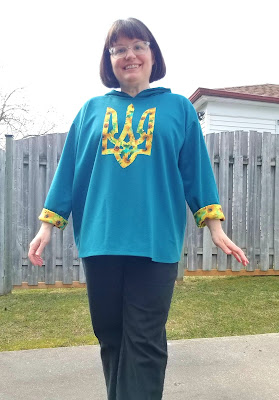 My Spring sewing plan is all in blues and yellows, and I found this bluish ponte in my stash; it was thrifted a while ago, and I was able to fit a basic pattern onto it and avoid the flaw in the fabric that was likely the reason it ended up at the thrift store. I chose Burda 116 from the July 2020 issue. It's a pullover top with a hood more than a traditional hoodie. I like it because it's more of a sweater style top, no ribbing at sleeve or hem, more my style. 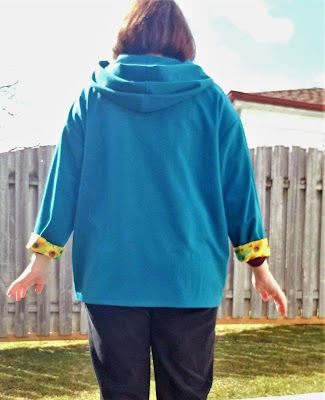 Then, for my embellishment,  I used a cotton sunflower print which I recently bought to make some face masks. There was enough left for this project. The applique image is the Tryzub, the symbol on the modern coat of arms of Ukraine, but one that goes back to the days of Volodomyr the Great, around 980 AD. 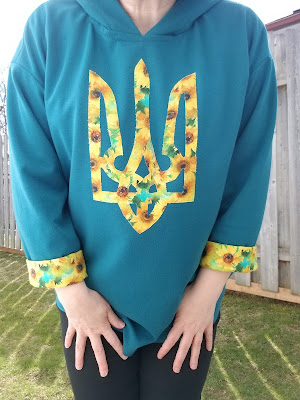 I liked the idea of combining this symbol with sunflowers, the flower of Ukraine. I used some Steam a Seam to make an applique, using a pattern I printed off as my base. I attached it to the front of the hoodie before sewing it together to make the pressing easier. 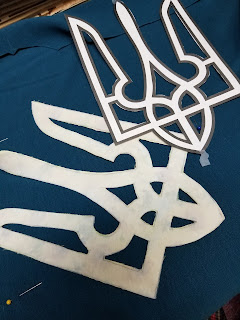 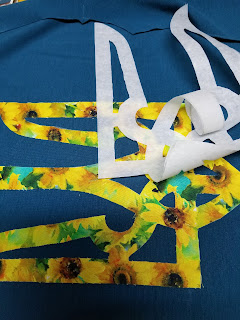 I also used the sunflower fabric to make a deep sleeve facing, so that I could wear the sleeves rolled up with the contrast showing. Because the sleeve isn't tightly fitting, the cotton facing doesn't restrict movement. Although my project is quite simple, I really enjoyed the challenge involved in conceptualizing and making this in a short time. Plus I like the contrast of the two fabrics a lot. 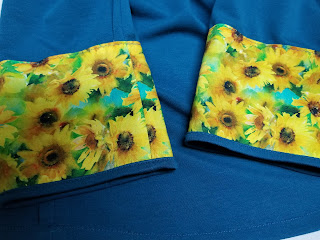 The fit of this oversized top reminds me of the kind of bunnyhug you'd throw on to sit around the campfire, and so I also like it for the association with childhood summers. Because it's an oversized style, I lengthened the body by 2", so it was a balanced length for the style I wanted. But I also shortened the sleeve by 2".

I know that this is a hoodie I will actually wear, and it was a form of 'craftivism' for me, as I spent most of the construction time listening to podcasts about Ukraine and thinking about the people I know there, and current events. 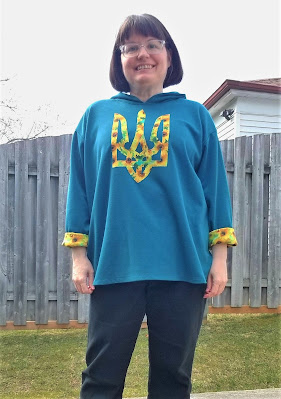