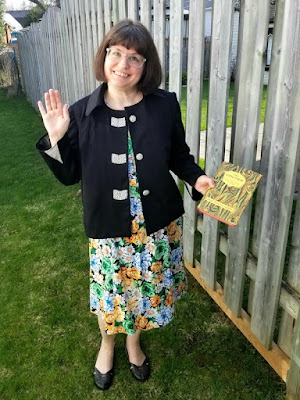 Well, I was fortunate enough to move on to the second round of the PatternReview Sewing Bee this year, and was also fortunate that I had the week off so I could work on my new assignment! I'm glad I did because it was a tough one. The brief was to create a garment in which the buttonholes were the feature -- not the buttons, but the buttonholes. Yikes! I was stumped at first.

I thought about it all the first day and came up with tons of different ideas, that were all rejected almost immediately. I researched various buttonhole techniques and ideas, and when I watched a Threads video on shaped buttonholes I was hit with the idea of making a "Book Jacket" - perfect for this librarian! It would feature open book shaped buttonholes. Once I had that thought I couldn't get rid of it, so spent most of the next day looking through my jacket & blazer patterns for a clean silhouette with buttons all the way up the front. Harder than you might think. 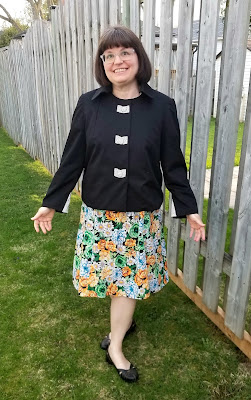 But Burda came through for me again; I found the perfect pattern, 108 from 12/2021. It's a boxy style, and also had a coat variation (109). This was helpful because the collar on 109 had a wider gap at centre front, which I thought I'd need to accommodate my elaborate front buttonhole feature which required an extended placket to fit them on while keeping them centred on the centre front line. So I traced mostly 108, but 109's collar. 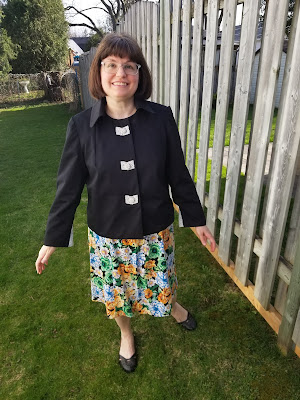 There are only 3 buttonholes, but laid out against the plain black jacket I think they stand out as the main feature. This is after all my Book Jacket, so my faced buttonholes shaped as an open book had to be the focus. To avoid disrupting the effect, I used the same text fabric for self-covered buttons (one of my favourite kind of buttons). While buttonholes for a jacket like this are usually horizontal, I had to switch mine to vertical to fit the book theme - the spine of the book becomes the buttonhole.

I made the buttonhole feature using a paper template I drew out, and was very careful to line the centres up with the centre front line. I don't always do a lot of thread tracing to mark centre front and button placement marks on a pattern, but I did here. On my samples I tried stitching the 'lips' to the facing to make a clean edged window, but I preferred the look of the topstitched window, as I felt it emphasized the book outline a little more. So that's what I did on the jacket. I put the buttonholes in on the right front pattern piece before I did anything else at all, in case I needed to recut the front and try again ;) Fortunately I didn't, so went ahead with construction.

I also decided to add in a little sleeve gusset at the wrist as a way to bring in the text fabric somewhere else in the garment. It's a little detail that shows when I'm moving. 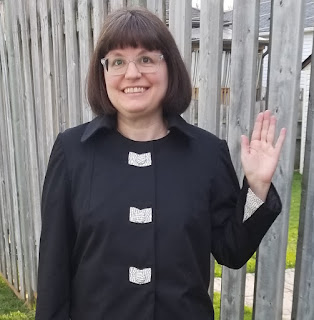 I find the jacket comfortable and like it both done up and open -- I wasn't intending to ever wear it open, but the book effect still works when it's not buttoned up, and the counter effect of seeing the buttons separately actually adds to it, I think. I'm happy with the contrast between the black background and the book shaped buttonholes and text fabric. I enjoyed learning the shaped buttonhole technique and now have lots of ideas about how to use it in future projects. 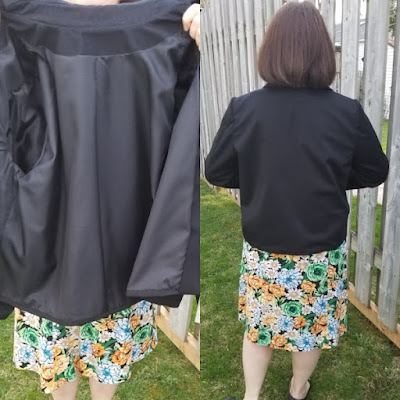 Another element I liked about this project was that once again I was able to use stash fabrics & notions for the entire project, even if it meant I had to use two different types of lining for the body and the sleeves.

The pattern included little patch pockets, but I didn't like them with this version - I was going for streamlined. So I didn't add them. I did shorten the sleeves (always) but not the body of the jacket. And my main change to the pattern (besides the buttonholes of course) was to extend the placket on the right side by 1/2" to accommodate the size of the book buttonholes. This was a cute pattern even with a few small issues with the instructions - it all worked out and I'm very pleased with this little jacket. The Sewing Bee really forced me to think about buttonholes in a new way! 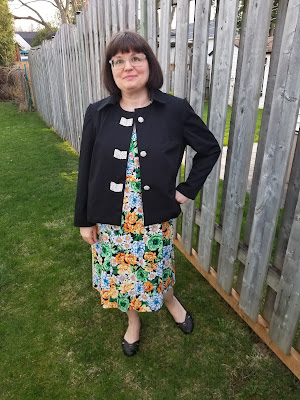