Weekend Review: The Threads of the Heart

I read this book last month as part of the annual celebration of Women in Translation that happens every August. I was drawn to it by the description -- some magical embroidery in there is just what I needed to put this on my TBR, and then my husband found a copy at a thrift store. It was meant to be!
It was written in French, but is set in a remote hill town in Spain. There are elements of magical realism; the previously mentioned embroidery, for example. It is basically the story of a family, told by Soledad, the youngest surviving child, in her own adult years.
Frasquita is the mother, the woman who has inherited a gift that is passed on from mother to daughter in her family. There is a blindfolded ritual in the night once a young girl comes of age, and the daughter must then wait to open a box in which her gift resides. Frasquita's gift was sewing, and her gowns can make someone beautiful for the first time in their lives, or hide a pregnancy, or stitch life back into someone on death's door. Her skill attracts the attention of a local aristocrat, however, and he becomes locked into a cycle of rooster fighting and bets with Frasquita's husband José, with his ultimate aim being to gain Frasquita.
This is a middle aged woman with four children by this time, and an unusual patience for her lumpish husband. But José's greed gets the best of him and he gambles away Frasquita. This is the final straw for Frasquita; she spends the required night with the aristocrat but is done with José. This moment sets her on her own road, and she takes her children and a cart, and sets off walking all across southern Spain and into Africa, dragging her children behind her for years. They encounter civil war, revolutionaries, a kindly Arabic woman who rescues them, and much more. The stories are larger than life, political, romantic, dreadful, fantastical, until finally Soledad decides to end this legacy of the family curse herself.
Sewing is not only a plot element, it's also a strong metaphor for a lot of what goes on in this book. When Soledad is still young, Frasquita is dying. And this is what Soledad says: 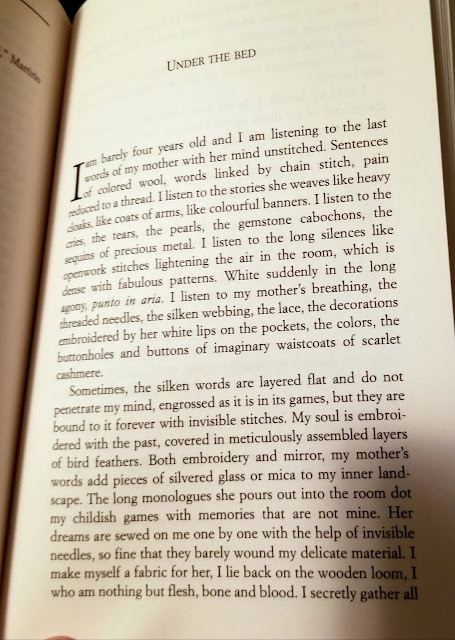 I found this an engrossing read, definitely in the tradition of magical realism, but with a starker setting. It's Martinez's first novel, and it's a strong debut. Apparently it is also going to be made into a film, and it would be interesting to see if that ever shows up in the English world as well.
If you are also drawn to this kind of storytelling, and the idea of stitching the world in place appeals to you, give this one a try yourself. There is a fair amount of description of her stitch work and its effects both early on and near the end of the book, so anyone who stitches will find this compelling. Just allow yourself some time to get into the rhythm of the book, and you may find that this lengthy book flies by.
at 9:30 AM