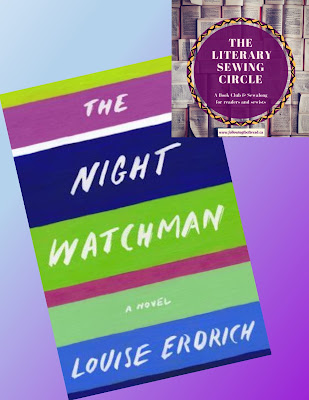 Today's the day to talk about the author of our pick for this round of the #LiterarySewingCircle!

Louise Erdrich is an American author, writer of novels, poetry, and children's books featuring Native American characters and settings. She is an enrolled member of the Turtle Mountain Band of Chippewa Indians, a federally recognized tribe of the Anishinaabe (also known as Ojibwe and Chippewa).

Erdrich is widely acclaimed as one of the most significant writers of the second wave of the Native American Renaissance.

She is the author of fifteen novels as well as volumes of poetry, children’s books, short stories, and a memoir of early motherhood. Her novel The Round House won the National Book Award for Fiction. The Plague of Doves won the Anisfield-Wolf Book Award and was a finalist for the Pulitzer Prize, and her debut novel, Love Medicine, was the winner of the National Book Critics Circle Award. Erdrich has received the Library of Congress Prize in American Fiction, the prestigious PEN/Saul Bellow Award for Achievement in American Fiction, and the Dayton Literary Peace Prize. She lives in Minnesota with her daughters and is the owner of Birchbark Books, a small independent bookstore.

You can listen to Louise Erdrich talking about The Night Watchman at Politics and Prose, from early March this year.

If you're interested in exploring Indigenous fiction and stories a bit more, be sure to check out Louise's bookstore, Birchbark Books -- there is even a section of the online store that has some beautiful craftwork for sale.

You can tell from Erdrich's writing that she really understands sewing, and has a visceral sense of it that shows she is also a maker. Here are some quotes from her works that show her familiarity with small moments of sewing bliss, and her love of clothing & embellishments.

“To sew is to pray. Men don't understand this. They see the whole but they don't see the stitches. They don't see the speech of the creator in the work of the needle. We mend. We women turn things inside out and set things right. We salvage what we can of human garments and piece the rest into blankets. Sometimes our stitches stutter and slow. Only a woman's eyes can tell. Other times, the tension in the stitches might be too tight because of tears, but only we know what emotion went into the making. Only women can hear the prayer.”

“Your life feels different on you, once you greet death and understand your heart’s position. You wear your life like a garment from the mission bundle sale ever after – lightly because you realize you never paid nothing for it, cherishing because you know you won’t ever come by such a bargain again.”

"Ever since the beginning these twins are sewing. One sews with light and one with dark. The first twin’s beads are cut-glass whites and pales, and the other twin’s beads are glittering deep red and blue-black indigo. One twin uses an awl made of an otter’s sharpened penis bone, the other uses that of a bear. They sew with a single sinew thread, in, out, fast and furious, each trying to set one more bead into the pattern than her sister, each trying to upset the balance of the world...

The pattern glitters with cruelty. The blue beads are colored with fish blood, the reds with powdered heart. The beads collect in borders of mercy. The yellows are dyed with the ocher of silence. There is no telling which twin will fall asleep first, allowing the other's colors to dominate, for how long. The design grows, the overlay deepens. The beaders have no other order at the heart of their being. Do you know that the beads are sewn onto the fabric of the earth with endless strands of human muscle, human sinew, human hair? We are as crucial to this making as other animals. No more and no less important than the deer.”

“How the flowers were fired and colored into the design. Perhaps this sort of gesture will be lost, perhaps it is a function of consciousness that we don’t need in order to survive. Perhaps this piece of evolution makes no sense—our hunger for everyday sorts of visual pleasure—but I don’t think so. I think we have survived because we love beauty and because we find each other beautiful. I think it may be our strongest quality.”

― Future Home of the Living God

"...sometimes, as I sit sewing in the room of the rebuilt house in which I slept as a child, I hear the crackle, catch a whiff of smoke from the stove downstairs and suddenly the room goes dark, the stitches burn beneath my fingers, and I am sewing with a needle of hot silver, a thread of fire."