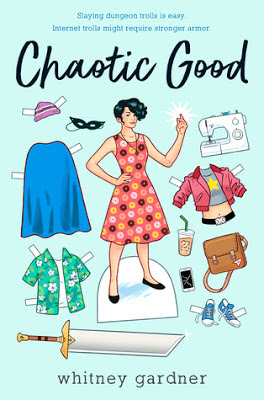 I picked this one up solely on the strength of that cover. Just look at it! So much fun. Who wouldn't want to dress up like a paper doll? I wish they'd sold this with it's own Cameron paper doll, including that marvellous donut print dress :)

Main character Cameron is a cosplayer and sewist who dreams of getting into CalTech with her costume portfolio. After a recent win for her costume at a ComicCon, however, she's being harassed online by male comic fans who don't think she's an authentic comic fan (quelle surprise).

Alongside this harassment, which she doesn't share with her family, she's just moved from Portland to Eugene, so now has a summer without friends nearby either. So her focus is just to sew up a storm.

However, she encounters sexism in real life as she heads into the new-to-her local comic shop and is mansplained by the guy working there. She vows not to go back, but since she shortly after gets an online order for a costume, she needs to return to do some research. On her twin brother Cooper's suggestion she dresses up like a boy to head back, and magically everything is now peachy keen. She begins to get drawn into the comic shop's world when they begin a D&D game, and she's accepted as one of the boys.

There's romance, humour, ambition, family dynamics, and lots of sewing in this book, all reasons I really enjoyed it. The story is fast paced, creative and super entertaining for anyone with geeky interests like comics, D&D, or sewing! I am so clueless about D&D that I had no idea the title referred to the game until halfway through the book. So it was definitely more the sewing aspect that appealed to me at the start - obviously!

There were a few things about the book that I questioned upon reflection. Cameron is very conveniently given a non-gendered name to work with, and is not very girly -- she has no bosom to speak of and can easily disguise herself as a boy -- gender is very binary here. Also, she is supposed to be dedicated to sewing her portfolio for the CalTech application, but ends up sewing mostly when she's upset and overtired (and as any sewist knows that's usually a recipe for disaster but Cameron always ends up with a triumph, I don't know how she does it!). She's too distracted by comics and D&D and Lincoln, one of the other players, to sew terribly often.

But otherwise, there was a great mix of diverse characters in this book, some wonderful older characters (like Lincoln's gran), and lots to think about in the storyline. This would make a great group read for teens, but I also just really enjoyed it as a sewing themed read.