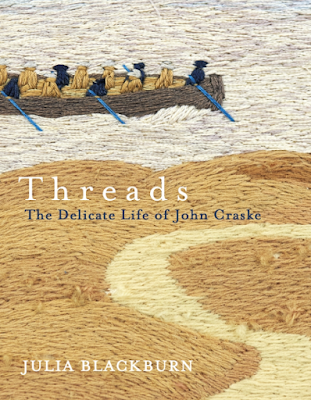 I first heard about this book in the bibliography of a craft book I was studying, and thought it sounded intriguing enough to track down via Interlibrary Loan. It delivered, though not in the way I was first expecting.

It is a delicate biography, mostly because it isn't one at all. The author decides to write about this intriguing character, John Craske (b1881, d1943) but finds that there isn't all that much to discover. The book is about more than Craske himself; it's also about her search for him -- the places she goes to do her research, the people she encounters along the way, related to Craske or not, and her own life story is inextricably linked to the narrative, as her husband dies during the course of her writing this book.

It is fascinating and absorbing reading.

John Craske himself, the backbone of the book, was an English fisherman from Norfolk who suffered from an undiagnosed disease (they think now it may have been some kind of diabetes). He would fall into long periods of invalidism, in which he seemed not to be in the world at all. His wife encouraged him to paint in order to engage with the world, and feel as if he was on the open seas again, which he missed. Visitors noted that all the surfaces of their house were covered with paintings propped up, and even painted right onto the doors and windowsills. When John became too ill to be able to paint, his wife set him onto embroidery, which he could do from his bed.

His embroideries were fresh and unique; he used his painting techniques to make embroidered images of the seascapes he loved. As a stitcher myself I could see how these were unusual for the time, being freeform and individual. He uses his wools and threads to indicate wind, waves, grasses, and more; the movement in his stitching is extraordinary. He was working on a huge panel depicting Dunkirk when he died, leaving only a square of the sky undone.

Blackburn examines not only his life history and the ways in which he turned to painting and then embroidery, but also what happened to his works after he'd died, and the ways in which his reputation was both made and forgotten. Integral to his brief popularity were the writers Sylvia Townsend Warner and Valentine Ackland, who discovered him in his small village, and championed his art after that -- partly out of admiration and partly out of a feeling that he and his wife really needed some financial support.

Blackburn also visits a couple of small regional museums and institutions that hold a few of Craske's remaining works, finding them poorly stored, not exhibited, or shown a lot of care. They seem to treat them as the output of a local artisan, not worth too much attention. I hope that this book can at least inspire those places to preserve Craske's work for the future; they are original, with a individual viewpoint.

The book as a whole feels wild and windy, with a lot of open spaces to think and ponder. One of the things John Craske said about being out on the ocean in a small boat was that it made you feel like a small bit of the world; this book's wide-ranging interest and narrative structure also makes you, the reader, feel like one small point in a huge tapestry of life. This was a wonderful, rambling discovery.

(first posted at The Indextrious Reader)