I finished this dress in June - but who knows when I began it? This is something I found in a box of UFOs when I was tidying up my sewing space. 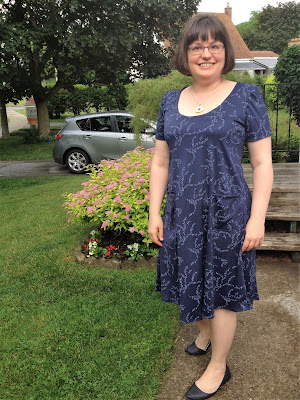 It was started so long ago I have no idea what pattern it is. I just know it was started a long time ago since it was nearly ankle length when I pulled it out of the box, and I moved on from that look years ago! It was nearly finished; there was one sleeve pinned into place and a hem required. Why did I give up on this dress so close to the end? 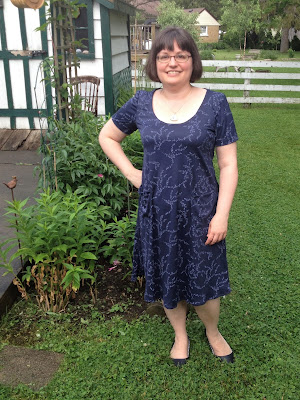 One reason might have been that the neckband was all stretched and bubbled and I didn't know how to fix it then, not having made many knit projects at the beginning of my sewing career. Or maybe I just got distracted! I was also aware that I'd started this years ago as there were no pockets added. I would never neglect pockets now. 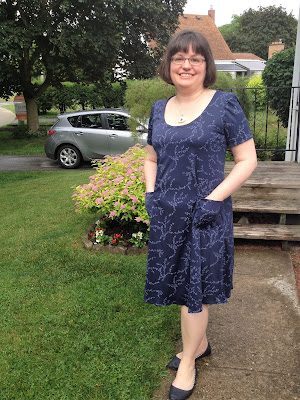 In any case this was an easy evening's work to fix up and finish, and I've been enjoying wearing it ever since. First I stitched on that sleeve. Then I fixed the neckline by simply turning the neckband under and using it as a bias facing. Once stitched down, it both sturdily reinforces the neckline and sits smoothly with no bumps in sight. 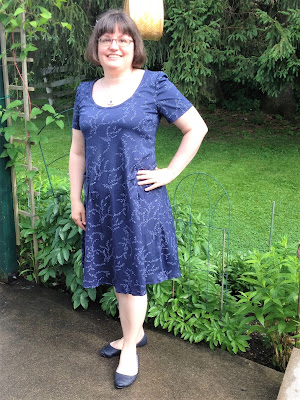 Next up was the hemline. I tried this on, measured it, and cut 7 inches off the bottom, finishing with a narrow hem. Then I used that extra length that I'd trimmed off to make a set of patch pockets. I tried to match the print as much as possible to let them blend in easily. Since it's not a regular print it wasn't too hard. I decided to round the bottom of the pockets to reflect the rounded neckline as well. I like the end results. 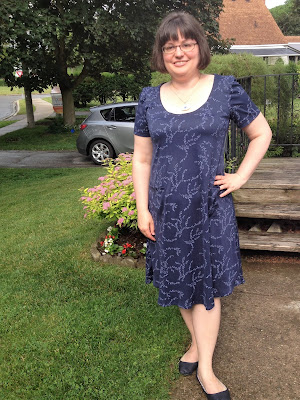 The only thing left after that was to fix the back -- there was a small casing inside the middle panel with openings to the right side. I am assuming it was for a narrow self belt to be run through, as this seems a 90s pattern. But I just added a piece of narrow elastic instead and stitched it down at both ends of the casing. I had tried it on at first without anything in the casing, and it was just too full, so had to add something. I like the elastic - simple and effective. 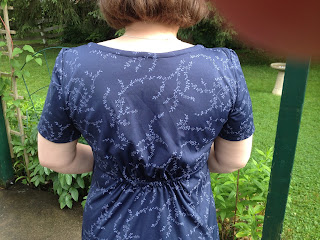 It's kind of nice to get a very old UFO sewn up and worn, although I do wonder why I ever put it down in the first place. Oh well, another blue dress to add to my closet! 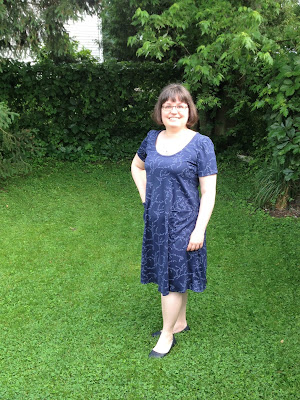