This Greek classic is a slow and dreamy read. It features three sisters, Maria, Infanta, and Katerina. The story is mostly told from the viewpoint of Katerina, the youngest, and it ranges across three summers (obviously). The book's structure follows that, split into three sections that really only highlight the summer months; the winter is dealt with in a few sentences.

These three spend much of their time drowsing in meadows, talking about their futures, and falling in love. As the summers progress, they also grow apart a little as their focus changes to different things. The main question of the book is, however, what they are to do with themselves and their energy. They all seem a little different in personality; Maria is sexually adventurous and has a strong desire for physical intimacy and children, Infanta is reserved and has a tendency toward aceticism (unfortunately egged on by her bitter maiden aunt), while Katerina is boisterous and uncontained, full of big emotion and ambition.
The reason I'm sharing this title today, though, besides the fact that it is a lovely read, lies in Infanta's incessant embroidering. As the quieter middle daughter, she has an artistic side that comes out in her embroidery, as per this observation by Katerina: 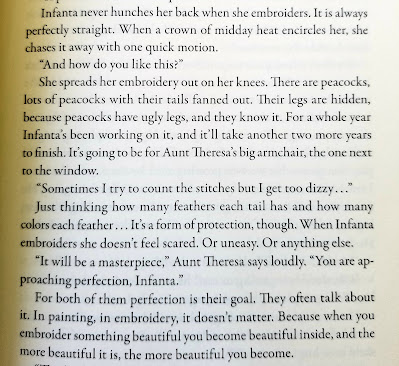 Katerina's artistic nature is revealed much more in her penchant for telling stories, both as a young child and as the narrator of this story. But domestic arts and sewing tie into this realization for her as well:

Over the course of this book the sisters observe neighbours and family, finding out secrets while also being mystified by other personalities. They watch how varied people's foibles and quirks shape their relationships. They have plenty of their own quirks as well, and each of the sisters chooses a path distinct from one another. Maria settles down in the first section, Infanta has a romantic entanglement in the second, and Katerina chooses her path in the third. The end is a little abrupt but we can see that Katerina has broken the hazy dream that has enveloped their lives (and this story) so far, and has changed her destiny with her stubborn willfulness. It's not the character flaw that her mother always told her it was; it's her path forward.
It was an engrossing read, full of beautiful writing, imagery, landscape, characterizations and overlaid with a sense of nostalgia. I liked the structure, but I did feel confused at times at the passage of time in this story. Which summer was it again? And how old are these sisters exactly? Other than that, however, I found this an easy read, a perfect one for summer nights.
at 11:20 AM