This is a fun and unusual book. Like the subtitle says, these projects are edgy upcycles, mainly from men's clothing. I enjoyed looking through this book, but these clothes are definitely not my style - I can't see making any of them myself. But younger or edgier sewists would probably love it!

The book is neatly laid out. There are three sections: Sweatshirts and T-Shirts, Men's (dress) shirts, and Scarves and Neckties. Each section has numerous suggestions for how to reshape and reuse clothing items, and there are a lot of different ideas and techniques, it's not just a repeat of one idea.

However, many of the projects start with XL menswear to cut up for the tiny Japanese woman. Thus many changes and design adaptations would have to be made if you don't fit into this trajectory. As concepts, though, there are some neat projects in here.

The skirt on the left upper side of the cover is the same piece as the top on the upper right, for example - it's just how you put it on and button it that changes the look. There are a couple of other convertible pieces included ,which is fun. I felt like the first section, using sweatshirts and tees, was the most successful. The dress shirt items look really messy and suitable only to young people who are experimenting with their look. A couple of the vests made of scarves in the final section were nice and I'd consider them wearable by a wider range of sewists.

One of my favourite things in the book was a detail in the first project. She took an XL sweatshirt, cut off the sleeves and pleated up the centre front, holding it with a sewn on loop. I liked the folds that resulted, and could see this technique used for a bodice overlay on a fancy dress, for example. 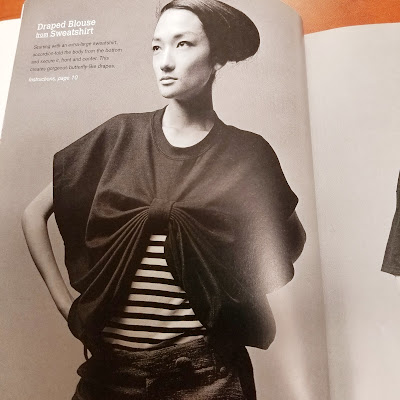 Although the aesthetic isn't really for me, this is a successful book that does what it says it will. There are lots of large clear images, the instructions for the upcycles have both descriptive steps and sketches to guide readers, and there is a wide variety of options included that readers could then take and use in other ways as well. If you're into upcycling clothing and want some fresh ideas, this might be one you want to take a look at.