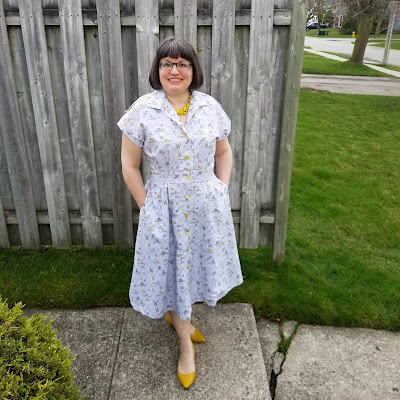 I had my Literary Sewing Circle project idea fairly early on. But somehow I found myself sewing right up to my own deadline again! I had a couple of projects to finish before I could get started on this one, and I am also finding that my focus and level of concentration is way down, and my sewing is much slower than usual. 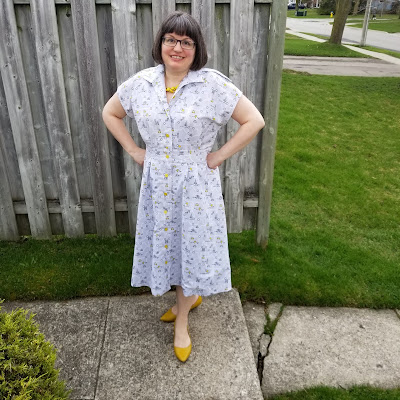 However! Here it is. I was inspired by the trips that both Lydia and Charley make to New York during the story. Lydia and Jean-Philippe travel to New York to see her brother and to visit Jean-Philippe's sick sergeant. Lydia describes Benjamin's house, and the wharf, and the surrounding streets as they travel to see the Joncourt's house where the sergeant is staying. Charley, meanwhile, goes to New York to have her art dealer cousin Wendy look at the painting of the Bellewether, the one that keeps mysteriously getting turned back out in her office. Charley finds modern New York busy with all its bustling streets, gardens and people. 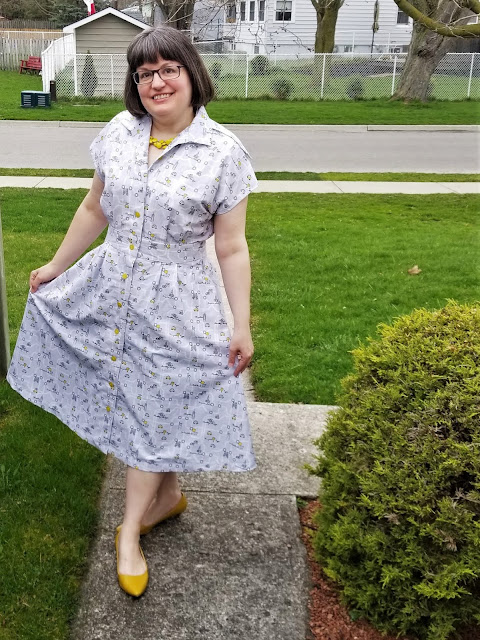 All this New York talk made me think of a fabric I thrifted about a year ago. It is actually a 100% cotton sheet, with a wonderful stylized New York print of the street grid and some extra special elements of New York living, like Central Park and Taxis, appearing as little yellow accents. This hit of yellow also makes me think of Lydia. 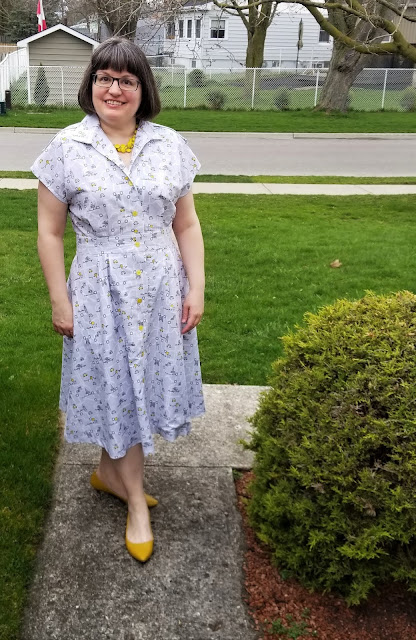 I knew I wanted to make something structured, so that any sheet I use doesn't look too much like its source when done. So I decided on a shirtdress but waffled between many patterns for a while. I finally decided on this 1988 "Family Circle" Butterick 6083 that has a bit of easy wearing feel to it but also some structure. It also has a style feature of epaulets at the shoulders, which I feel gives a little nod to Jean-Philippe's military uniform also. 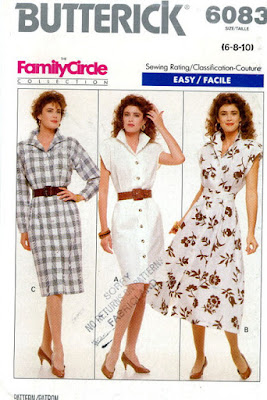 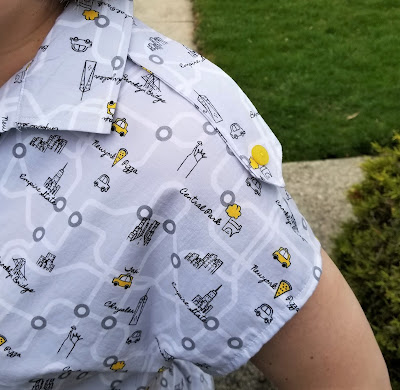 There were a few issues with the pattern - they assume that the sizes they draft for are women with tiny waists, for one. I had to add 3 inches to the size 16 waistband in order to get it fitted to my waist. I only added 1/2" to the side seams of bodice and skirt, though. The pattern has two pleats on each side of centre, and also some ease stitching when attaching to the waistband. Because I had made my waistband larger, the easing was not necessary. 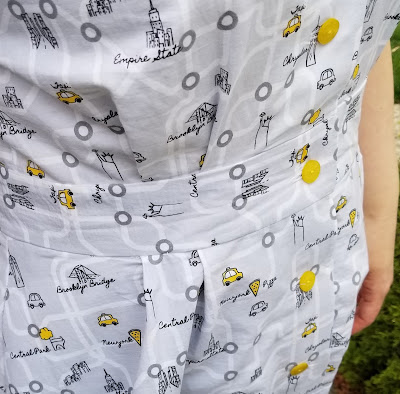 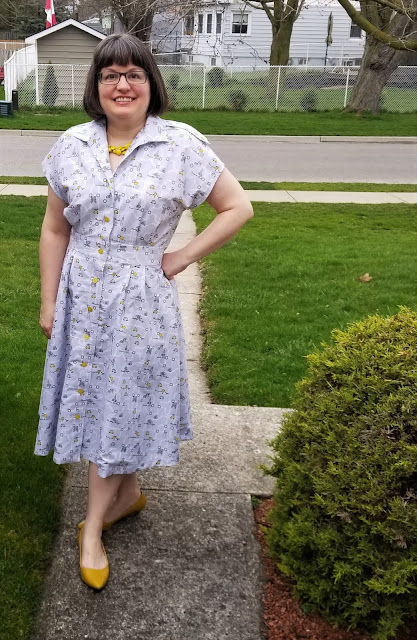 The hardest part of this whole dress, for me, was the collar. I don't know why I couldn't seem to get it right. It was very frustrating indeed. It's still a little bumpier than I'd like and I might just pick it off and recut a new collar from the scraps of the sheet, since there's quite a bit left. 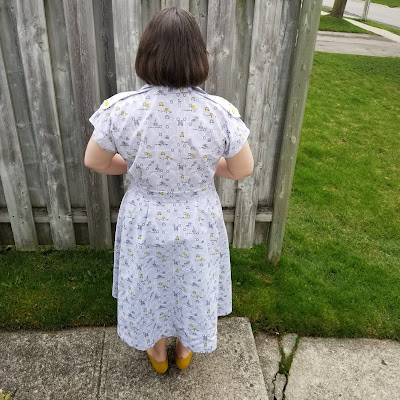 I got the basic adjustments right -- mainly height ones -- had to shorten the skirt by 2" and took 1.5" out of the bodice length split between two places. But I seemed to have one issue after another with my sewing; I had to unpick the collar at one side and readjust the angle of an epaulet, I had to unpick the waist seam after I realized I had sewn one pocket down facing backwards, and I had to redo the hem in one place after my lining got bunched up. All these issues came from the same problem of focus that I've been finding in short supply lately. But they were all fixable, and fortunately I paid close attention when installing my buttonholes and they all worked out perfectly on the first try. 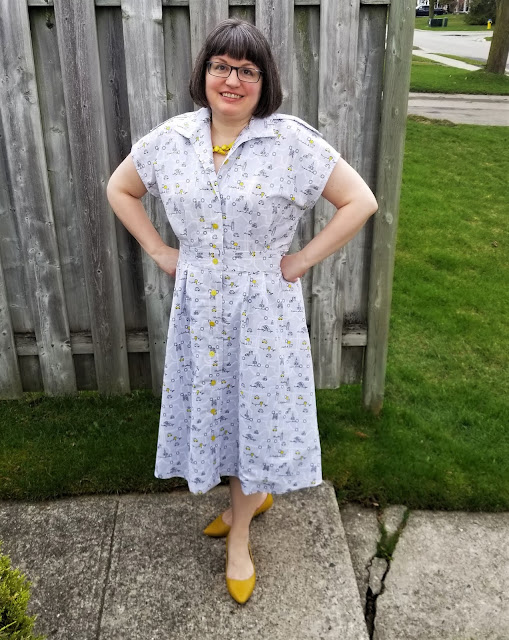 I happily found the most cheery yellow contrast buttons in my stash of the right size and number, and used those for front closures and epaulets. And of course I added in some side seam pockets! 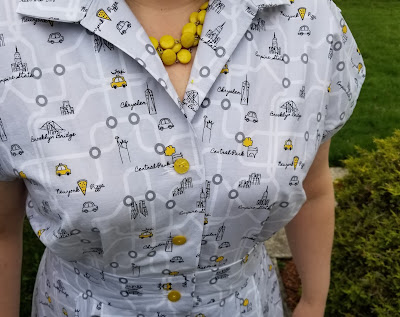 Because this is 100% cotton, to make it wearable without the skirt constantly sticking to itself, I added a grey lining to the skirt portion, as I have tons of grey bemberg in my stash. This makes the skirt feel a little fuller and allows it to hang freely and not get caught up around my knees.


I enjoyed this light, satisfyingly happy ending book at this time of stress, and hope that everyone who participated in this round of the Literary Sewing Circle was able to enjoy as well. You can check out the link up post to see everyone's final projects. 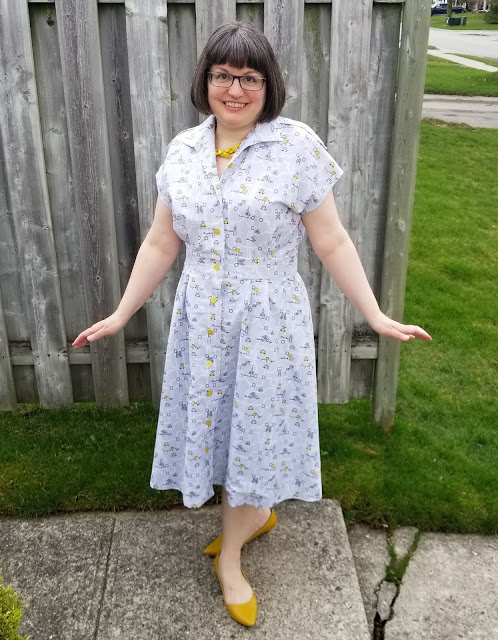