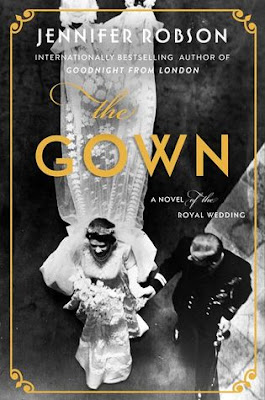 On the last weekend of every month, I will be reviewing a non-instructional book -- a novel, memoir, poems -- that I think fellow sewists might enjoy. Here is the first, an historical novel with lots of stitching detail in that is also so very readable!

I just finished this lovely read, a story of three women connected by family ties and friendship, centred in the Norman Hartnell embroidery workshop that created Queen Elizabeth's wedding gown.

Starting in 1947, we meet Ann Hedges, an embroiderer at the Hartnell workshop who is living alone; her parents are dead, her brother was killed in the Blitz, and her young widowed sister-in-law has just emigrated to Canada. She is getting by, but is fairly lonely.

Next we meet Miriam Dassin, a French Jewish woman who has left France after surviving the war and Ravensbruck, though all of her family was killed. She is desperate for a job, so when she's turned away from Hartnell's workshop she goes in the front door instead and presents herself right to Norman Hartnell himself, with her letters of recommendation from Christian Dior. Her training in French embroidery houses convinces the kindly Hartnell to hire her, and she begins right away, placed alongside Ann as one of the more experienced stitchers.

The two develop a strong friendship, slowly -- they are both reserved and as women alone are quite cautious. But Ann needs a roommate now that her sister-in-law is gone, and Miriam needs a place to live. They become partners both at work and in their living arrangements, depending on one another to keep their spirits up and to encourage one another in their varied pursuits. Ann loves to draw dress designs, while Miriam finds an urge to depict her past in fabric, becoming in the end a renowned textile artist -- but that is far in the future.

For now, they find out that they will be embroidering motifs for the young Princess Elizabeth's wedding gown, including the fiddly appliques for her train. The whole workroom is thrilled and anxious, as this wedding is a huge highlight in a post-war Britain still suffering from rations and austerity. Everyone is excited and wants details; the embroiderers and sewists at Hartnell are beleaguered by journalists and paparazzi style questions as they leave work each day. Giving out details of The Gown could bring them quite a lot of money -- but nobody leaks anything.

Combined with these two narrative lines is a third, modern-day one: Ann's granddaughter Heather, from Toronto, has come to England to find the truth about her grandmother's life; Ann has just died and left Heather some floral appliques that look like the ones on the Queen's wedding dress. Heather tracks down some clues that lead her to Miriam Dassin, now a world famous artist who is retired and doesn't give any interviews. But luck is on Heather's side, and by chance she is introduced to Professor Daniel Friedman, who is also Miriam Dassin's grandson...

Robson has the atmosphere of post-war London down to details; it was so engrossing to read of Ann's council house in the suburbs, and how they took the early train to work because it was cheaper, and made do with their ration coupons, and were always cold due to the lack of coal and the hardest winter in memory, and how class was still so defining, and how women's lives were constrained by social expectation even after all the changes during wartime. She also has the sewing and embroidering details to perfection. As a sewist and embroiderer myself, I really enjoyed the descriptions of the workroom - the large frames, the miniscule embroideries, the way that Ann cuts applique shapes from satin and mentions both the grain of the fabric and the way it frays and can't be turned under and basted, the beads, the importance of light, the tired feeling in the eyes and neck after a long day - it was all so realistic and evocative.

The story is 'about' two women working on the elaborate wedding gown for the Princess, but that's just the central motif, and Robson has embellished a complex story around it, weaving together two distinct lives and stories in an utterly convincing way. There is some romance in the story, but what I loved about it, besides all the concentration on sewing and stitching, is that it focuses on two women at work. It's about their working lives, the routine and the details of work and how it melds into art and into the discovery of Miriam's art form. These two friends talk about much more than men and romance, and the side characters include a lot of other women who also support each other in difficult circumstances.

If there is any weakness in the book, I think it is in the modern day component; it just isn't as powerful as the 1947 story. There is a bit of a predictable feeling in the modern day romantic thread, but there is also a lot of great description of Miriam's art and success now that she near 90. It's just hard to compete with the two fabulous characters sewing and living in postwar London. But all three narratives converge beautifully, and feel very true to life. I was thoroughly absorbed in the book, and also really enjoyed the author's note and the interview with a real Hartnell embroiderer included at the end. A great read which was historically satisfying and artistically inspiring.

(this review first appeared at The Indextrious Reader)