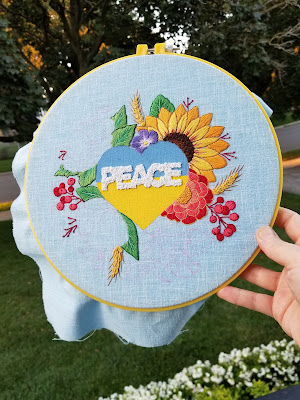 This week I finished up the two sprays of kalyna berries on my #PeaceForUkraineSAL project. As always, you can find this design on Embroidery Art by Nat's website.

This element may look simple but it wasn't; it took longer than some of the larger elements! This is because the berries are all done in padded satin stitch. So, to make them you're basically stitching them twice. 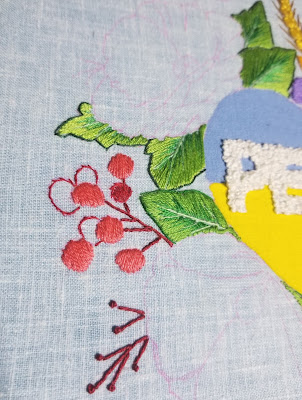 I outlined each one in one-strand split stitch, then filled in the berry with rough long split stitches. I made the pad stitches at a 90° angle to the direction I wanted the final stitches to lie, since there will be better coverage if the stitches are sitting opposite - no creeping between as might happen if they were all lying the same way. 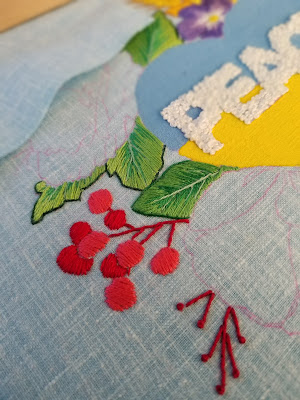 Anyhow, after all that split stitching came the second layer of satin stitch in two strands. Each berry was finished and then outlined in stem stitch, and I added a french knot to each to give them that berry look. Most were fine but a couple of the knots slid down between two stitches so I added another one on top in that case. I just keep fiddling until it looks about right ;) The stems were a nice quick whipped back stitch and I'm glad part of these two sprays was easy since I found this element very fiddly indeed! But I love the finished look and the pad stitching really does make them pop off the backing nicely. Next up, I'll be working on the pink mallow flower at the bottom of the design. 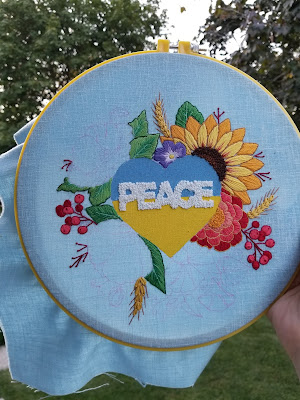 The instructions give a little bit of the history, legend and/or meanings behind each of the elements, and I think people may be familiar with the Kalyna (or viburnum) now that the folk song Chervona Kalyna seems to be everywhere. Today I'm sharing my favourite version: