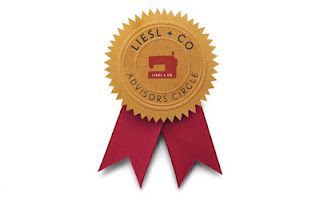 I announced earlier on that I'm a part of the Liesl & Co Advisors Circle for the year -- well, I've done my first project for their blog! You can find the post here. 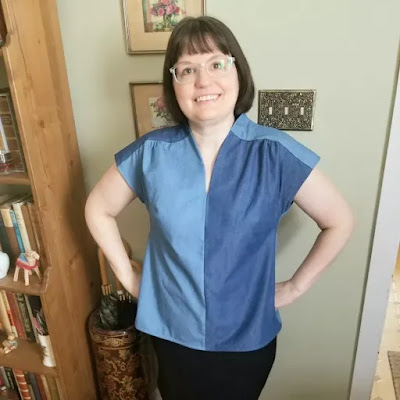 The idea for these projects is to take one or more of Liesl's patterns and adapt it in some way, or show another way to fabricate it. This time around the challenge was colour blocking. I had bought the Fira top when it was first released, and thought that this pattern would be a great option for colour blocking. Fortunately, Dyann from the Advisors Circle thought the same, so we did a joint post showing our versions.
For mine, I divided up the original front pattern piece into two, remembering to add a seam allowance to the new centre front seam (I used 1/2" for ease of measuring). The front yokes are already separate, so I only had to divide the back yoke into two rather than cutting on a fold as well. The back of the top already has a centre seam so no problems there! 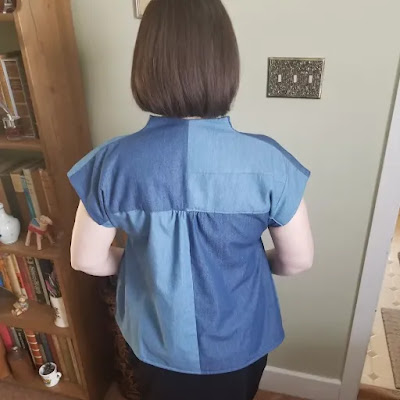 I used some denim scraps from an earlier dress, which coincidentally happened to be Butterick 6567, a Lisette dress, one of the patterns that Liesl designed for Butterick in the past. That wasn't planned! But I had a fair bit of these lightweight denims and thought that the low contrast would be visually pleasing; I had used the contrast in the dress and liked it.
The hardest thing about this top was just making sure I cut the pieces in the right orientation, so that I'd have the correct pattern of colours to put together. With such limited fabric, I measured more than twice before cutting once ;) 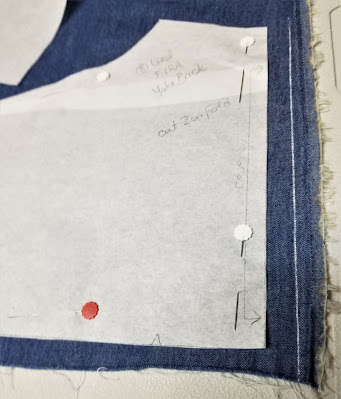 I used the darker fabric for the inner yoke since I had quite a bit more of that, and ended up using a strip of it as a hem facing as well, since I had to shorten the pattern quite a bit to fit onto my fabric. Thankfully I'm so short that it still worked, as long as I didn't turn up much of a hem, so 1/4" seam hem facing it was. 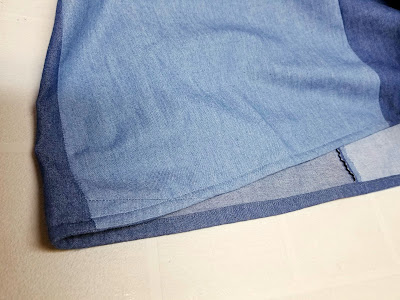 This was a real puzzle to work on. Since I was quite low on larger pieces of the paler blue denim, I had to piece together remnants to get chunks large enough to cut the back yoke from and ended up having to also piece little corners of the front yoke and the lower back edge as well. Fortunately piecing looks great in denim, and also goes with the scrappy colour blocking feel, I think.
I'm really happy with the top and found it a fun challenge to make. Aside from having to give it a press every time I want to wear it, it's great ;) The pattern itself is pretty simple, although the yoke construction can be a bit of a stumper for a minute. The inner yoke is sewn together with the body, then it's flipped to the outside and topstitched down on the outside. This isn't a way I've done a yoke before, so I had to think about it and play with my fabric a bit to get the hang of it. But I think it was worth it -- a fun top and one that used up some really nice remnant pieces. A win! 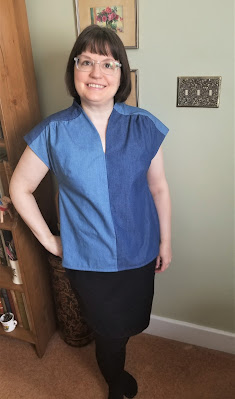