In my recent post on the McCalls 4591 blouse, I mentioned a few issues I had with it. The primary problem was that the front bow was too heavy in this cotton fabric -- even though it's a lawn, it's just too heavy and stiff. Something with drape will probably work better with this pattern. As I often say when watching the Great British Sewing Bee, success often comes down to fabric choice. And this wasn't quite the right choice here! 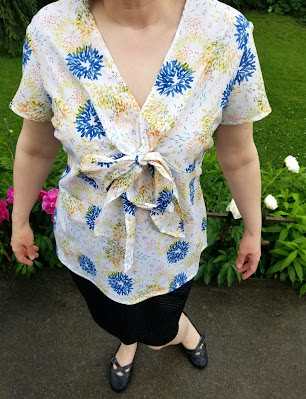 The other issue I have with this pattern is that the V neckline is far too low for my tastes. But if I shortened it between bust and shoulder like I often do, the seamline between top and bottom would sit right across the bust. So I had to come up with another solution. 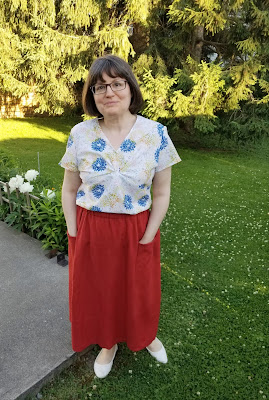 Fortunately, there was a solution that seemed to fix both problems in one go! I untied the bow and crossed the extensions over one another, tucked inside the blouse. I pinned them down so that they formed a nice V line inside the existing neckline. Then I stitched the crossover seam down, and also across the line where the extensions crossed behind the seamline that runs across the blouse. Had to be careful to pin there so that no interior fabric was folded or bunched up at the seamline! 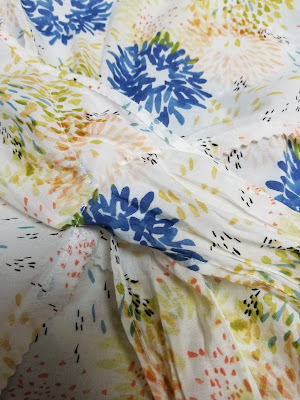 After that I simply trimmed the extensions off from the inside using my pinking shears as a quick snip and finish. 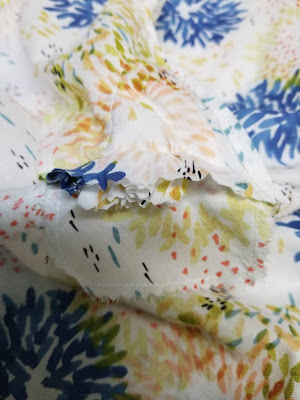 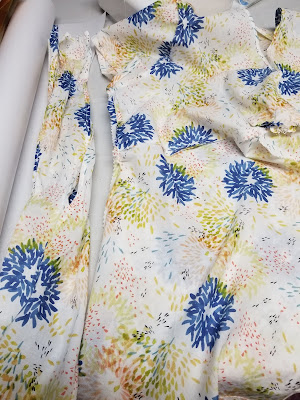 It works pretty well, gathering at the front with a bit of a starburst effect, and definitely fills in the low neckline sufficiently.  I still don't think it's my favourite effort ever, but I do like this very pretty, lightweight summer fabric and think I'll probably get some wear out of it. Probably not with this skirt though, I don't think the silhouettes really go together, despite both being in my Summer Capsule plans. Oh well, learning opportunity! I still have another blouse to finish off before my Summer Capsule is done -- instead of making another pair of linen pants for the 6th piece, I've decided to go with a RTW capri that I already own and wear a lot. It's been an interesting exercise to try to put together a wardrobe of sorts, but I think I've confirmed to myself that I prefer dresses -- lots of one offs, and a complete outfit in one go! And that I like my sewing to be mostly mood driven. But I also always like a new learning challenge. And I have taken on another one...more on that later.