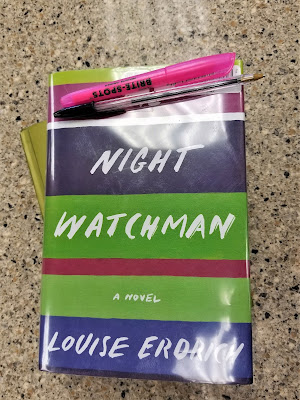 It's hard to believe that we are already halfway through our Literary Sewing Circle round for this fall! Today's the day for some serious book talk! How are you doing with the book? Have you started it yet? Finished it? Do you have any reactions you'd like to share?
Here are a few questions to ponder today and for the next while -- whether you have begun reading, or you've only read blurbs & author interviews so far and still have something to say, join in! Although there might be a few spoilers in the questions and discussion below so if you haven't got too far yet you might want to come back to this post. 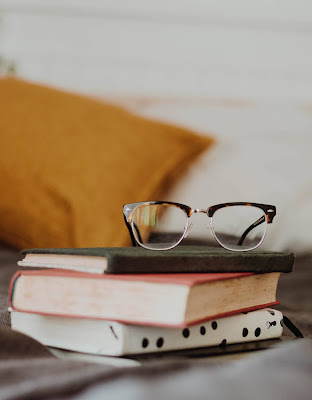 The first thing I knew about this book was that it was written by Louise Erdrich, and that was enough for me to put it on my TBR. I love her writing! But the concept of the book, that it was based on her grandfather's life and was looking at the political context of Indigenous rights in the fifties seemed really interesting as well. I just know that when I pick up a Louise Erdrich book I will enjoy it.

2. Were you familiar with the historical context of this book? Did you know about "Termination" of tribes in American politics?

I didn't know about this element of American governmental interaction with Indigenous tribes. It's not surprising in a way, but the scope of it was shocking when I learned a bit more. Looking into the history of Termination Bills further really illuminated reasons for the rise in activism in the late 60s, 70s and beyond by groups like the American Indian Movement -- so many tribes had to fight termination bills, and developed skills of resistance and a collective response.

3. There are a lot of characters interacting throughout the many chapters. Did you have any difficulty keeping them straight?

I didn't, because I thought Erdrich created strong individual characters with their own quirks and habits, making them memorable. I enjoyed the way that the different characters had different concerns, and how the story moved between them all.

4.Is there a particular character that you found especially compelling? Any themes or symbols that really resonate with you?

I liked the quiet steadiness of Thomas, and the determination of Patrice. I found them to be strong main characters who carried the novel.

But I really liked Millie Cloud as well; her depiction as someone removed from half of her family but trying to reconnect was compelling. And her love of learning and libraries, and her relationship to patterns and clothing was also endearing.

5. Names are important in this novel; from Pixie wanting to be called Patrice, to all the nicknames people are known by, and the meaning of family names, there is quite a bit of discussion of names. Why do you think this is a theme in the book?

A person's name can say a lot. Patrice demanding her more adult name rather than the nickname of Pixie shows her moving to a stronger self-determination in her life, I believe. And her sister's name, Vera, means 'truth', and Vera's experience reveals a dark truth about the treatment of Indigenous women that continues today. And their mother, Zhaanat, retains her traditional name - which reflects her entire lifestyle, as someone strongly tied to traditional ways.

Thomas Wazhushk's name means Muskrat -- and Muskrat is the animal who, despite his unprepossessing size and strength, was able to find a clump of mud to build the earth with in an Ojibwe creation story. He's a builder and defender; Thomas shows this in himself very strongly, with his letter writing, connection building, and defense of the tribe to the government in a direct delegation to Washington.

6. Erdrich discusses not only the shoddy treatment of tribes by the federal government, but also the treatment of Indigenous women in the larger society. The role of women on the reservation contrasts with the value placed on them outside. Do you think this is something that still goes on?

This is a disingenuous question, in a way. Poor treatment of Indigenous women goes on constantly -- here in Canada there is an entire National Inquiry report on Missing and Murdered Indigenous women, and many egregious examples of terrible, racist violence against Indigenous women that keep surfacing.

In the novel, Pixie is harrassed and attacked by local boys, but manages to escape. She doesn't say much about it to anyone except her mother, but the instigator of her attack suffers physical disfigurement that some say is retribution. When the legal system does nothing to protect or defend women, this kind of result is like a dream that evil deeds will be punished.

7. The novel is titled "The Night Watchman" in reference to Thomas Wazhushk -- his role as a watchman and guard is multifaceted. How do his jobs and his propensity for writing letters, communicating and advocating cement his central role in the story?

The novel was sparked by Erdrich's grandfather's experience, so it makes sense that Thomas is the main character. But he's also a spokesperson for the existential questions of identity and self-determination in this reservation and beyond. I think it's interesting how Thomas uses what he learned at residential school of the ways that white Americans think and act to benefit his goals. The descriptions of him writing letters and letters and letters, using his Palmer penmanship, is almost hypnotic.

It's a rich concept, Thomas as Night Watchman. Not only for the jewel bearing plant, but also for the reservation and its rights and identity. And also, he watches in the night, finding Roderick, owls, and Star People to help him on his way. There is a complex web of meaning in the seemingly simple title and position that Thomas holds.

There are many things in the book that appeal to me as project ideas. From the clothing described in our first inspiration post to many images and places that will be explored further in another inspiration post, I can imagine quite a few projects. Being careful of course not to be culturally insensitive!  I tend toward making dresses, and am thinking of a few stash fabrics that might reflect Thomas' letter writing, or perhaps some of the colours of the reservation's landscape or animal life. I don't have a firm idea yet but there are many possibilities to explore.