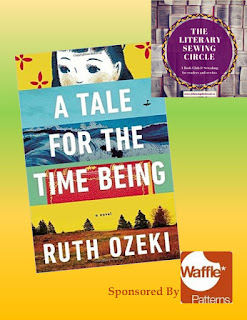 I so enjoyed this round of the Literary Sewing Circle! There was lots of good book talk, here on the blog and even some on Instagram and Pattern Review. I know there were many people reading who just didn't quite get a project done, so if you're one of them and you finish your project sometime, pop a link in the comments!

Today I wanted to share the projects that were made by deadline. There were a nice variety of inspirations used and some gorgeous fabrics too!

First let's look at the project that won the random prize draw: this beautiful top by Sara in Australia. She used a Japanese pattern book and some gorgeous fabric. 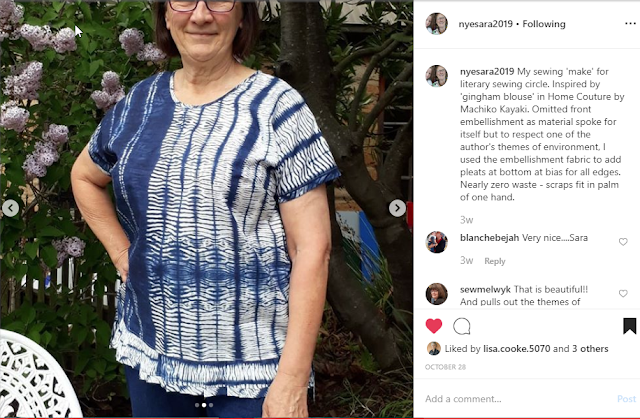 Then there was Lori from Frivolous at Last, with this great Japanese print Rachel Top from Jalie, inspired by Nao's anxious fish flops in her stomach.


I made a thing! It's been a long sewing dry spell, but I cracked it with this @jalie_patterns Rachel top. What a fantastic pattern! Quick sew, amazing results. This is also my make for the #LiterarySewingCircle hosted by @sewmelwyk of Following the Thread. We read A Tale for the Time Being by Ruth Ozeki, which was a great read, and those koi fish represent the slippery fish the main character feels flopping in her belly when she's feeling anxious. You can read more about it on my blog (link in bio). #sewing #Jalielife #JalieRachel #handmadewardrobe #thanksimadeit #ilovesewing #reading #sewthebook [Image: Lori stands with hand on hips wearing a teal blue top with red-pink chrysanthemums and koi fish on the fabric and a sewn-in sash at the waist. She is looking to the side and smiling.]
A post shared by Lori Bee (@frivolousatlast) on Nov 5, 2019 at 3:22pm PST

And Sarah took her inspiration from Jiko's powerful character, and made some red pants representing the New Woman of Jiko's youth.


It doesn’t get much better than reading AND sewing! This year @sewmelwyk selected “A Tale for the Time Being” for the #literarysewingcircle. My entry is these bright red pants which were inspired by Jiko, Nao’s Buddhist grandmother, who describes herself as having been a New Woman. New Women embraced modernization and rejected restrictive gender roles. One way this was shown was by scandalous pants wearing! One popular style was the beach pajama which I attempted to recreate using the @truebias #emersoncroppants as a base. Fabric is a vintage wool (I think) from a giant estate sale haul. As usual, making pants was a pain, but as I was making them I was channeling my inner Jiko “perfection, imperfection, same thing”, “love pants, hate pants, same thing”. Thanks for organizing,Melanie! I really enjoyed taking part! #sewingandreading #imakemyclothes #sewcialists #handmadewardrobe #memade #pantssewing #sewfancypants #sustainablesewing #sustainablefashion #literaryinspiration #sewtogether #sewfrugal #greensborosews #ncsews
A post shared by Sarah (@a.little.quiet) on Nov 11, 2019 at 9:26am PST


Dale made a glorious skirt from digitally printed fabric, inspired by Ruth and Oliver's trip to the mainland on the ferry.


My #literarysewingcircle project is inspired by Ruth’s trip to ‘The Liver’ with her husband. Flying into Vancouver Island a few years ago in a smaller plane gave me an opportunity to see all the little coves, boats, and sailboats along the coast. This is an incredibly simple skirt made from a lovely digital print. It is terribly out of season now (hello, Winnipeg) but I’m looking forward to wearing it in the spring. #ataleforthetimebeing
A post shared by Squirrel Sox Sews (@squirrelsoxsews) on Nov 12, 2019 at 5:48pm PST

And finally, I made my Sushi Cat Terrace Dress by Liesl & Co, inspired by the lovely cats in this book, and then squeezed in a Chrysanthemum print lace top as well, which evoked the Japanese feel and kind of reminded me of elements of the cover, too. 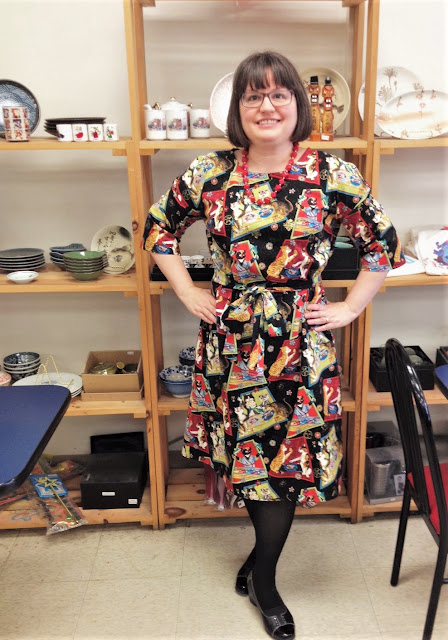 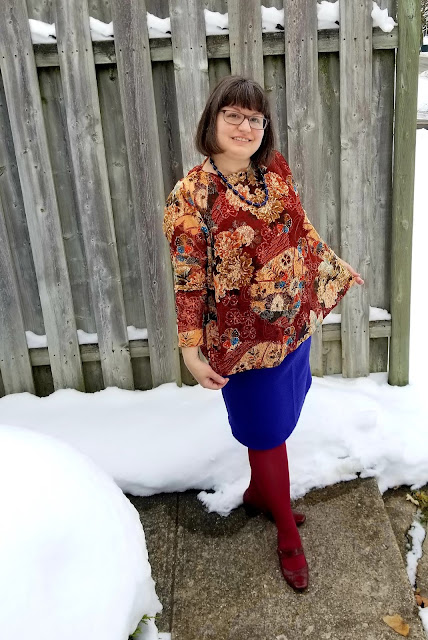 Look for next year's first Literary Sewing Circle round sometime in late January/early February. See you then!
at 9:00 AM