Refashioning Shows and Contests, oh my! 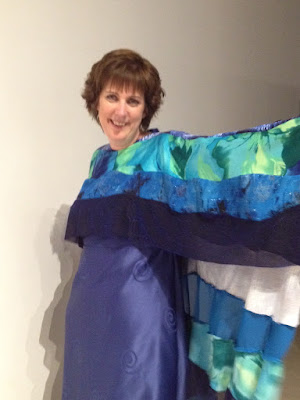 I made an upcycled project in April, all because of a local Refashion Show that was happening as part of a local week of sustainability in fashion events, our first ever, called Trashion Week. I signed up for this event, and then also realized it was the same dates as the Pattern Review Upcycling Contest, so I've also entered this project into that contest (you can see my entry here, and of course you can vote for me if you are a PR member and so wish!)

On to the project. I went back and forth with ideas for this project, but finally decided on my design mostly due to the availability of raw resources. I found a polyester damask tablecloth at the Goodwill that was just perfect - I loved the spiral swirl in it, and the colour was just right - the theme of the Refashion Show was "water". 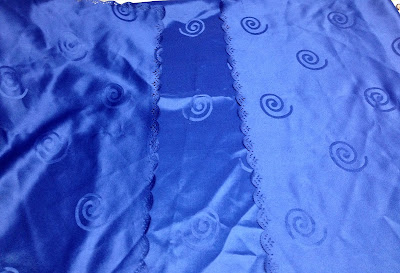 I looked for a pattern in my stash that would be easy to sew with this material, which wouldn't take much pressing or fussy design lines. I was going for a formal look, and finally chose Simplicity 8213, a Project Runway pattern which only has bust darts and otherwise no darts, gathering etc. 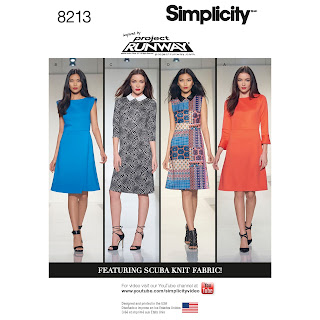 I extended the skirt to ankle length, and most fortunately, the tablecloth was just big enough for me to cut the bodice and skirt pieces at their extended length, using the punched edging of the tablecloth for the hem. There was only about an inch of fabric left between them. I also used the extra edge bits to cut the small flange for the sleeve, with the edging used for sleeve hems as well. This sewed together quite straightforwardly, with simple construction methods and basic seams. I sewed carefully so as not to snag this fabric, and tried very hard to press the bust darts flat, though I was only partially successful. I trimmed them on the inside and used my pressing ham, but they need to pressed prior to wearing every time as the press doesn't hold well, thanks to this fabric. 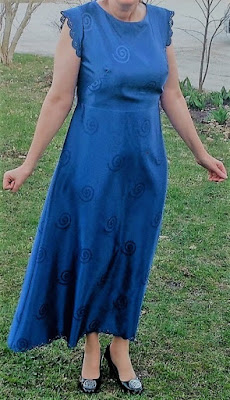 I also inserted the invisible zip carefully, as I didn't think this fabric would take to much ripping out and redoing. Thankfully it went in perfectly the first try, and when I put the neck facing on, the edging was also nice and square and matched up, whew. One of the judges for the show complimented my zip insertion, haha -- yes, that's what I was going for, never mind the whole "look" ;) 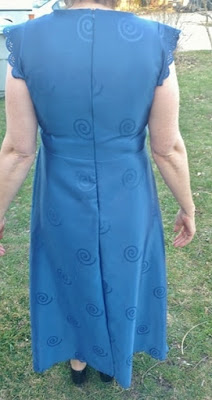 The dress was solid and unadorned so that the cape could shine -- that was the main design idea. I used a tutorial from Amari Designs which was exactly the style I was looking for. I made one from an old length of knit to test it out, and then used that piece to size the patchwork block I made from strips of two dresses, two skirts, and one scarf, all of which came either from a thrift store or my closet. 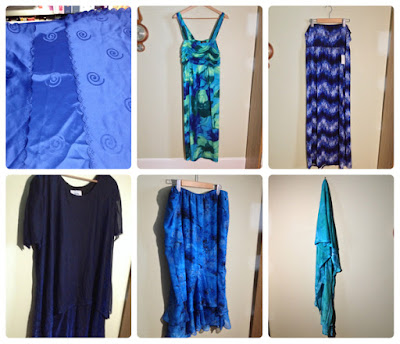 I sewed them together with curved seams to give a better impression of water -- this was time consuming, each seam was nearly 60" long, and took me about 40 - 45 minutes to cut, pin and sew. When I finally got the 5 ft by 5 ft block sewn (like 20 hours later), I cut and bound the neck opening and then decided not to hem the edges. I was planning on using a narrow hem, but the way the cape fell was just right, the edges rolled in slightly, and I didn't want a hem weighing down the floatiness of the finished cape, which was the entire point of it. So I left it raw edged. It works.


I had a great time at the show, since my model was a friend of mine with a great sense of humour. We enjoyed all the other designs (much more elaborate) and laughed a lot. I was pleased with my wearable design, though, and learned quite a bit making it. My friend is also planning on wearing this dress again! 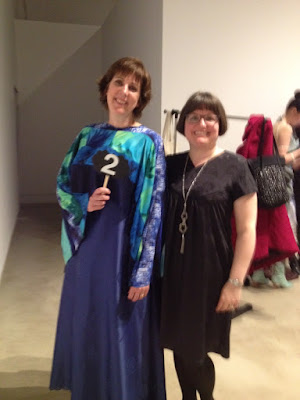