Truly Biased about this Sutton Blouse!

I spent some time sewing this weekend, getting a few projects done...here's looking at you, PR Weekend red Eleonore pull-on jeans! But that's a discussion for later...

Today I want to talk about this True Bias Sutton blouse that I started and finished in the last couple of days, and immediately wore today after hemming it late last night.

I've had the Sutton Blouse pattern for a little while now -- I first began to covet it after the Sew Mama Sew Super Online Sewing Match revealed a whole bunch of inspirational versions. I traced my pdf pattern a few weeks back now, without noting the size I was tracing -- I didn't feel like getting the pdf pages out again tonight, so I'll just tell you that I think it was a size 12 or 14 that I chose, and I did grade out at the hips about an inch. This fits me very well. 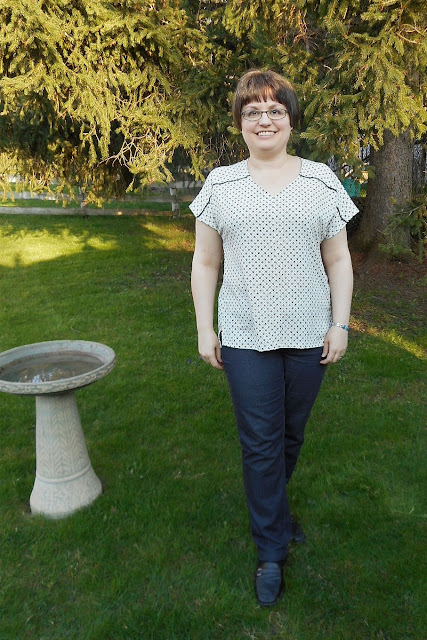 The Sutton Blouse requires a drapey, fluid fabric, and it uses French seams for nearly all the finishing. It looks gorgeous inside and out. But for these reasons, it is noted as an intermediate level sewing project.

I was using a polyester faille (I think it's faille; I know it is poly) which I found at the thrift store a few weeks ago. When I saw it I immediately thought of this pattern and knew it was time to try it. And finally I got around to it this weekend. The fabric is perfect because it is very fluid indeed - it doesn't take to pinning and pressing all that well, and was a bit of a bear to sew, being so slidey-aroundy. But slow and sure always works, and I was lucky with it, as I said on twitter earlier:


Anyhow, the pattern is fairly simple, with a front, a back and a yoke, along with a bias strip to finish the neckline. I did not have a large enough piece of fabric to fit the bias strip as shown in the pattern layout, so just cut 1" bias strips from the shorter bit left over after the main pieces were cut, stitched them together and finished the neckline with that strip. As the neckline is finished before sewing the front together, and trimmed after attaching, that process worked just fine. 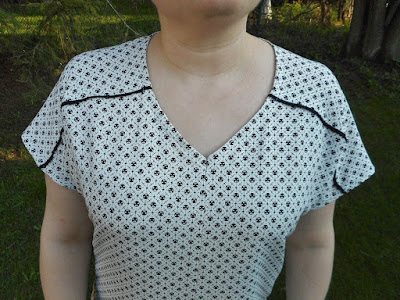 After I'd cut all these, I had a long strip left over from the edge of the fabric, so just stitched the two layers together to make a scarf that I can wear with this blouse or separately. The little bit of fabric that was left over was also made into bias tape, so every bit of this fabric was used! 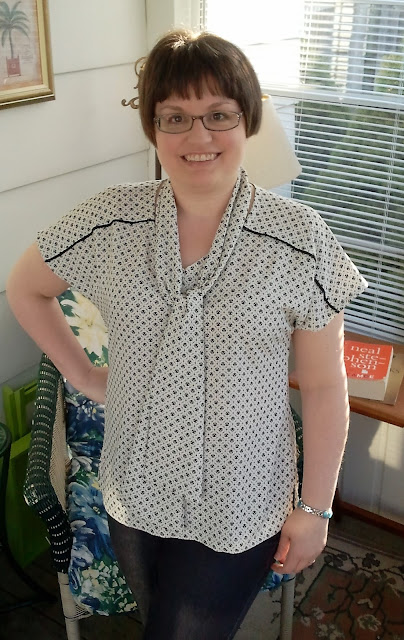 As everyone who has made this has mentioned, the finishing details are marvellous. French seams  - which I used for the first time making this project, and now love; very clear instructions with illustrated steps, with a nice finishing step for the uneven front and back & side slit. It went together logically and really effectively. The only real changes I made were to lengthen the front by 1/2" and to shorten the back by 1/2" plus deepen the back hem slightly -- it was too long for my frame at first and made me look a bit oddly proportioned, but just taking up that inch at the back made all the difference.


I also added in some black trim from my stash into the front yoke seams. I thought it would break up the pattern a bit, both to give the eye a focus point, and to mitigate any wobbly pattern match across that seam.


And I wore it today, and loved it. It is comfortable to wear, but also feels dressier than a tunic or tee. It was perfect for work, as not only did I feel dressed up enough but the neckline (which I didn't change at all) does not gape and is plenty low enough for my tastes. Many others have lowered the neckline, but I usually end up shortening between shoulder and bust on many patterns, so it works just fine for me.

This is a wonderful pattern - I can see making a handful more to have in every colour! I really like the fit and the relaxed yet dressy style. I like it with the scarf added and I like it by itself. I'm now biased in favour of a wardrobe of True Bias Suttons. 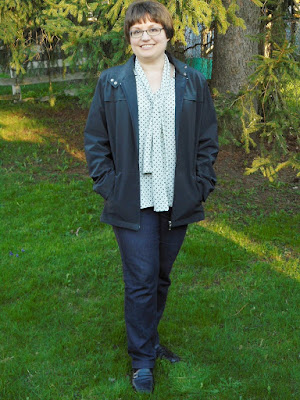